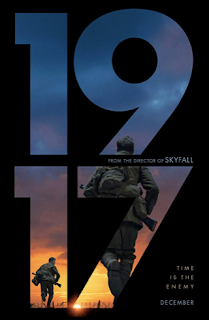 My View: 1917  (2019) R   Two young British privates (Dean-Charles Chapman, George MacKay) during the First World War are given what most likely is an impossible task: to deliver a message deep behind enemy lines that will stop a massacre of 1,600 British soldiers. One of the best films of just 2019 but one of the best films of the decade. Shot and edited as if the film is one long take, the film is a masterpiece in film editing. It’s a roller-coaster ride as we follow the two young soldiers on what very quickly looks to become either an hopeless task to complete at the least and, more than likely, a suicide mission where both men will die in vain. You are immersed rapidly into a deadly and rotten war as our two heroes are given almost impossible hurdles to overcome, all the while the clock is ticking. The film is breathtaking in its scope as we see up close the horrors of WWI and the effect it had on the men who had to fight it. The film will keep you on the edge of your seat, and it’s almost two-hour length will fly by. Please go see this in a theatre, as both the score and the cinematography are breathtaking. The two lead actors, Chapman and MacKay, are outstanding, giving us an everyman feel to their portrayals of two British boys trying to save their fellow soldiers from a horrible death. I gave 1917 my top vote in all three of my critic groups end of the year voting over some other incredible films of 2019.    My Rating: I Would Pay to See it Again     1917 Website

My View: Like a Boss (2020) R   Two friends, Mel (Rose Byrne) and Mia (Tiffany Haddish) start a beauty company together. The problem is that Mel is the practical one, and Mia can only see the lavish lifestyle that she thinks she deserves. In walks Claire (Salma Hayek) who wants to invest in their company and make all their dreams come true, that is, until it turns into their nightmare. The only thing I can say positive about this film is that it is mercifully a short 83 minutes long. I felt sorry for Byrne and Haddish as they gamely gave it everything they had, but the story is so bad, there is no way that they could save this horrible film. The plot is paper-thin, and the two lifelong friends turn on each other in a blink of an eye. Salma Hayek gives an incredibly horrific over-the-top performance, and she is not helped by an overacting Karan Soni, who plays her gofer / yes man. The ending seems to have written by a group of 8-year-olds, and if I ever hear the classic song 'Proud Mary' sung by Byrne and Haddish again (it's their go-to Karaoke tune), I know that I have been sent to hell and not heaven.  My Rating: You Would Have to Pay Me to See it Again    Like a Boss Website

Indiefest:  Just Mercy  (2019)  PG -13  A young Harvard grad lawyer, Bryan (Michael B. Jordan), could have the pick of any job in the country. Still, he picks Alabama to set up a law firm specializing in advocating for death row inmates he feels to have been wrongly condemned. He meets and defends Walter McMillan (Jamie Foxx), a man convicted of a notorious murder of an 18-year-old-girl. Led by powerful performances by Jordan and Foxx, this earnest film, while not quite the home run you want it to be, is a good film with the message that every person deserves a chance at justice. The film tugs at the heartstrings but never feels overpowering, letting its message and plot slowly develop to its conclusion. Fans of Brie Larson will be a little disappointed as she isn’t given much to do, other than play the cheerleader for Jordan’s determined lawyer. The film doesn’t break any new ground, but the fact that this film is based on a real story brings home enough of an impact to make it an interesting movie to watch.   My Rating: Full Price    Just Mercy Website

My View: Underwater (2020) PG-13   A crew of aquatic researchers are 7 miles underwater on the Ocean floor when an earthquake devastates subterranean laboratory. They soon discover that they have more than the ocean seabed to fear. A great deal of this film takes place in very dark and murky water with the cast in very bulky, outer-space style diving suits. This means that a great deal of the action is tough to see, and the cast, speaking into their suit’s communication system, are at times incredibly hard to understand. I have a feeling that the film was much longer, and the studio made the filmmakers cut about 30 minutes because some of the transitions from one scene to another are almost unexplainable. Divers complain about not have enough oxygen, and then, in the next scene, they are fine, and sometimes we seem to time travel a bit, as the crew, walking on the ocean floor, moving at incredible speed and distance, while at other times they struggle to go a few feet. Other than a few newspaper clippings in the opening credits, there isn’t much setup, so we never really get to understand what the crew was doing in the laboratory and what their relationships between each other are. The ending feels rushed, and all the scares in this film are the ‘jump out of the dark’ style, which gets old very quickly. I hope Kristen Stewart got a big paycheck for this film, because she looks uncomfortable throughout the film, almost as uncomfortable as I was watching the movie.   My Rating: Cable    Underwater Website 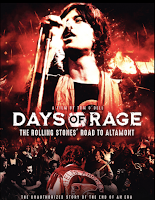 Indiefest: Days of Rage: The Rolling Stones’ Road to Altamont (2020)   At the end of the 60s, the Rolling Stones had become the voice of the new era. It all came crashing down at a rock concert that changed their lives forever. Days of Rage is an excellent and informative documentary on what led to a death at a free rock concert. I loved all the news footage as the film shows us how and why this concert was almost doomed to fail from the start. People remember The British invasion, but what this film points out is that the Stones were, at the time, almost the anti-Beatles, striving to be something new and different from all the other British bands to tour the states in the late 60s. The film gives us great insight into why and how the outlaw biker gang, the Hells Angels, became the security for the concert and just how things got so quickly out of hand. The film has some tremendous classic Stones live concert footage that fans of the group will want to see. I thought I knew about what happened at Altamont but, because of this film, I have a new understanding of what went down that fateful night.   My Rating: Full Price    Days of Rage Info

Forgotten Film: The Others (2001)  PG-13  Grace (Nicole Kidman) moves to a mansion on Jersey with her two children while waiting for her husband to return from the Second World War. Her two children have a disease that means they cannot be exposed to sunlight. Due to her children’s affliction, she has created a series of rules that must be followed, or the children could be harmed. The home and her children become too much for her, so she hires a group of servants who soon learn that breaking the rules will have some unexpected consequences. I love this film, how it slowly, darkly builds the tension without having to resort to tricks or easy scares. Kidman gives one of her best performances as the mother who finds herself in a highly disturbing situation, one that she may not be able to handle. I can’t give away much more of the plot without ruining the movie, but let me say this, it’s one of the best uses of suspense in a film and will probably shock you a few times with the twists and turns the plot takes.   My Rating: Full Price    The Others Info

Coming Soon to a Theatre Near You:  Mulan (2020)   A young Chinese maiden (Yifei Liu) disguises herself as a male warrior when her ailing father is called into the army to protect the country from the Huns. I loved the animated film, and this live-action movie looks terrific.    Mulan Website 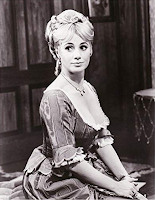