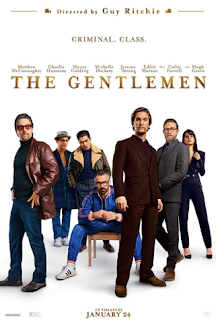 My View: The Gentlemen (2019) R   Mickey (Matthew McConaughey) is the weed lord of England and wants to settle down with his wife, Rosalind (Michelle Dockery), and sell his drug empire. It won’t be an easy sell. Writer/director Guy Ritchie goes back to his roots when he used to do witty and gritty films like Lock, Stock, and Two Smoking Barrels (2000) and Snatch (1998). The film is a little too flashy and very complicated at the start, and it took me quite a while to warm up to its rather brash language and violence, but about halfway through the film, I really started to enjoy it. McConaughey isn’t given too much to do other than be super cool (which we know he is good at), but the rest of the cast just has a blast playing some fun and off-the-wall characters. Charlie Hunnam, playing McConaughey’s right-hand man, is perfect in the role, and Colin Farrell gives a hilarious performance of a coach of a gang of small-time gagsters slash boxers. The best performance is Hugh Grant playing a con-man who is trying to swindle everyone he deals with. Grant is hilarious, with a thick British accent and twinkle in his eye as he tries to swindle a big score. Not quite a home run but still a good time at the movies, I hope Ritchie keeps making movies like this one instead of dreck that he has done lately (Aladdin, King Arthur: Legend of the Sword, The Man from U.N.C.L.E.).    My Rating: Bargain Matinee   The Gentlemen Website

My View:  The Last Full Measure (2019) R  Scott Huffman (Sebastian Stan) is given the task of investigating if thirty-four years after his death, Airman Willam H Pitsegnbarger Jr. (‘Pits’) is worthy of getting the nation’s highest military honor, for his actions on the battlefield. Huffman will discover that there are many secrets being hidden to Pits’ story. This is such a remarkable story that you want the film to be better than it is. With a cast that includes Samuel L. Jackson, Christopher Plummer, Bradley Whitford, Ed Harris, William Hurt, Peter Fonda, Amy Madigan, and Diane Ladd, you would think that this film would just fly by, but instead, it drags as we keep going back to flashbacks to the day that Pitts died. There are a lot of talking head scenes as Vietnam vets anguish over that day, but the film never delivers the emotional punch that is needed to make this film worth watching.    My Rating: Cable    The Last Full Measure Website

In Case You Missed It (A Film Just Released on DVD / Blu-ray):  Gemini Man (2019)  PG-13    An over-the-hill hitman (Will Smith) takes on his worst nightmare, a younger clone of himself bent on killing him. Let's get right to what everyone will be talking about, the CGI younger Will Smith in the film. At times, the CGI does a great job and looks like a real person, but there are times, especially when we first meet the clone that looks fake and very animated. This takes away from the film, as you are consistently taken from the storyline or the action, looking at how well or not the film is carrying off this gimmick. I call it a gimmick because, as one of my fellow critics noted after the film screening, it would have been easier (and less costly) to cast a young actor in the part and then add makeup for the older version. The action is well done, but the storyline is weak, and the ending is just stupid and an easy out. Throughout the film, I kept asking, why did two-time Oscar winner Ang Lee want to do this film, and how could it be this bad directed by him.    My Rating: Cable    Gemini Man Website

In Memory of Ed Wood (A Movie I've Only Seen in Trailers But Just Looks Like a Bad Idea): Gretel & Hansel (2020) PG-13   A young girl, Gretel (Sophia Lillis) leads her little brother, Hansel (Sam Leakey) into the woods in search of food and shelter. They come across a woman named Holda (Alice Krige) who claims that she wants to help the children, but Gretel senses that there is something evil about the woman. As of writing this, movie critics are not being offered a screening, never a good sign for a movie.    Gretel & Hansel Website

Forgotten Film: Bandslam (2009) PG   Will (Gaelan Connell) is a bit of a geek who's life revolves around music. He is recruited by Charlotte (Aly Michalka), who has put together a band to compete in the upcoming Battle of the Bands competition. Will knows something is missing from Charlotte’s band, and he finds Sa5m (Vanessa Hudgens) and adds her to the band, which instantly begins to gel. What I love about this film (besides the music which is catchy and fun) is how the film treats these teens like actual people, with real feelings and dreams. Hudgens and Michalka can sing, and Connell is perfect as the awkward kid who doesn’t think any girl would be interested in him. It’s a fun ride that reminds me a little of the fabulous 80s teen films that I fell in love with.   My Rating: Full Price    Bandslam Info

Weird Credits: From the credits of The Gentlemen: Crowd Voice Casting Assistant

Coming Soon to a Theatre Near You: The Rhythm Section (2020) R   Stephanie (Blake Lively) will go at any length to seek revenge against those who orchestrated a plane crash that killed her family. I am always interested to see what Blake Lively has picked for her next role.     The Rhythm Section Website 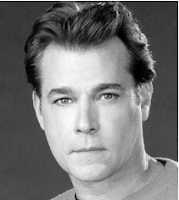