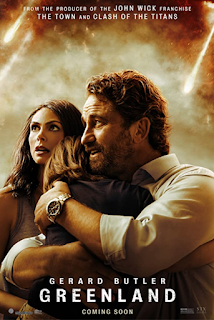 My View: Greenland (2020) PG-13   News that cities around the world are being leveled by the fragments of a comet that has entered the earth’s atmosphere. John (Gerard Butler), his estranged wife Allison (Morena Baccarin), and their young son, Nathan ( Roger Dale Floyd), are on a desperate trek to find a possible safe haven as the world around them evolves into chaos and madness. I liked the first third of this movie as it sets up nicely the stakes; no one expects the comet to do any damage and when it is apparent there is a real danger, that John and his family must make hard choices. The problem with this film is after the comet starts its destruction, the plot becomes full of holes, some as large as the craters that are being made by Clarke (the comet is named after Sci-Fi writer legend Arthur C. Clarke). We are repeatedly hit over the head with the fact that Nathan is diabetic, so much so that it seems the kid is constantly in need of his insulin. I’ve seen addicts on horrible TV dramas that didn’t need a hit as much as Nathan does. The plot goes even thinner to create problems for the family, including separating all three members from each other, and (small spoiler alert) I’m not clear exactly how they find each other again. One of the fun things about disaster films is watching all the destruction as our heroes navigate through the wreckage and carnage. Greenland keeps hinting at the destruction, but it rarely interacts with our characters; it just left out there as a possible occurrence. The film asks us to think about the possibility of the end of the world, but I just kept wondering only about the possibility of how soon this film would end instead.   My Rating: Cable    Greenland Website    The film is available to rent on participating on-demand services.

My View: Fatale (2020) R  Derrick (Michael Ealy), a successful sports agent, has a one-night stand with a sexy and mysterious woman (Hilary Swank). Derrick picked the wrong woman to mess with, and now his life, his family, and his career are in peril as he tries desperately to put the pieces together as he falls deep into her trap. I had hope for this film about 20 minutes in when the plot could have gone two ways; unfortunately, the film took the easy route, and we get a movie about a man who makes a mistake and the bad cop that is determined to take him down to pay for it. Swank plays a decorated cop who likes to blow off steam in Vegas and sleeps with our ‘hero’ Derrick, who feels like his wife just might be cheating on him. After a break-in and assault at their home, Derrick is surprised to find out that the lead detective is the woman he slept with in Vegas. The plot gets messy after that reveal, and it never finds its way back to reason, with an ending that will have you saying ‘really?’ to the screen.   My Rating: Cable   Fatale Website   Now playing in select theatres.

Indiefest: Hunter Hunter (2020)   Joseph (Devon Sawa), his wife Anne (Camille Sullivan), and their daughter Renée (Summer H. Howell) are a family living in the remote wilderness, struggling to survive as they earn a living as fur trappers. To their dismay, a rogue wolf has returned and is robbing their traps. Joseph leaves his family behind to trap the wolf, with Anne and Renée to fend for themselves in woods that have become dark and deadly. Okay, let us get this out in the open right now; this movie's ending is one of the most brutal scenes I have seen. A real blow that will have you stunned. That being said, this is an immensely enjoyable film full of wonderful moments and a plot that ramps up the suspense as the film goes along. The world that Joseph and his family live in is challenging, harsh, and not easy. They are bringing up their daughter Renee in this world of hunting and trapping, all the while, staying away as much as possible from the outside world. Anne is starting to feel maybe this isn’t the world for her daughter to grow up in, that Anne chose this life when she got involved with Joseph but that Renee didn’t. All this is moot when it is evident that a lone wolf that has terrified the family in the past has returned. Joseph is determined to hunt down the wolf and leaves his family behind to do so, leaving his family venerable to an attack. I love this film and the robust and compelling performance of Camille Sullivan, who gives a gritty, impassioned role that makes her character feel real and moving our emotions to tears.    My Rating: Full Price   Hunter Hunter Website   Now playing in select theatres and is available to rent on participating on-demand services.

Indiefest: Modern Persuasion (2020)   Wren (Alicia Witt) is a successful working woman who has never gotten over a lost love from college. In walks Owen (Shane McRae), her old college sweetheart who wants to hire Wren’s company to promote his new app. Can Wren juggle working with Owen with her past staring her in the face? I have a soft part in my soul for Indie films that don’t try to be too arty, don’t try to be so cutting edge with their movie. Modern Persuasion is a fun, light romantic movie that uses Jane Austin’s Persuasion as a basis for its plot. While not breaking any new ground, the film is aided by a strong supporting cast that includes Mark Moses, Liza Lapira, and the marvelous Bebe Neuwirth, making it stand out from the Hallmark Chanel films it will be compared to. The likable, dependable Alicia Witt in the lead role as the forlorn Wren also helps the film move along at a nice pace. It’s an enjoyable foray that, while is predictable, is just what you want from this genre, a romance with everyone getting what they want and need in the end.   My Rating: Bargain Matinee     Modern Persuasion Info    The film is available to rent on participating on-demand services.

Forgotten Film: The Birdwatcher (2015)   Saffron (Camille Sullivan) is a single mother of two who discovers that her cancer has turned terminal. Saffron goes on a quest to find her birth-mother, Birdy (Gabrielle Rose), a woman that never wanted to see her after giving up Saffron for adoption. Saffron wants to find her birth mother to see if she will take in her children after she dies. The Birdwatcher is a wonderfully filmed movie that takes place mostly outdoors, as Saffron’s birth-mother is an ornithologist. The film isn’t always a comfortable watch because most of the characters, including Birdy, are not easy to like. Most of the relationships in the movie are strained, with people who have a hard time feeling connected to one another. The film is worth watching because the performances are so compelling, with Camille Sullivan standing out as the flawed but determined Saffron, a woman forced to make tough decisions as her world crashes around her.   My Rating: Bargain Matinee     The Birdwatcher Website

Coming Soon to a Screen Near You:  Chaos Walking  (2021)  PG-13  In a world where a virus killed all the women and living creatures have the ability to read each other’s minds, Todd (Tom Holland) encounters Viola (Daisy Ridley), a strange woman who others on the planet want to hunt her down. Todd vows to protect Viola and discovers that he has a hidden power that can help to unlock his planet’s dark secrets. Hey, a sci-fi film directed by the guy who did Edge of Tomorrow and stars Tom Holland and Daisy Ridley? It sounds like a fun film to watch.    Chaos Walking Facebook Page