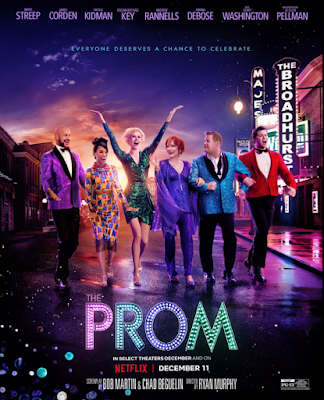 My View: The Prom (2020) PG-13   Two down on their luck Broadway stars (Meryl Streep, Jame Corden) travel to a small Indiana town to support a high school girl, Emma (Jo Ellen Pellman), who, against the wishes of the townspeople, wants to take her girlfriend to the prom. First, I didn’t expect that this film would go longer (2 hours eleven minutes) than some proms have. The film must have twenty musical numbers. So many musical numbers that they kind of all just crash into each other. I loved the lead actress, Jo Ellen Pellman, who has a beautiful singing voice and is perfect as the sweet, innocent Emma. The film is based on a somewhat actual event and was performed on Broadway. This film's star power should have made it much more fun than it is with a cast that includes Nicole Kidman, Kerry Washington, Keegan-Michael Key, Andrew Rannells, Tracey Ullman, Kevin Chamberlin, and Mary Kay Place. The film feels slapped together with a storyline stretched so thin it collapses under its own weight as it goes over the top, time after time. Now, don’t get me wrong, Meryl Streep steals the spotlight every time she is on the screen, and her numbers are bright and campy. That being said, I never found myself loving or even liking most of the film that was, for this musical film-loving critic, a chore to watch.    My Rating: Bargain Matinee   The Prom Website     Available on the Netflix platform and currently playing in select theatres including Landmark Midtown Art  and Springs Cinema and Taphouse in the Atlanta area.

Indiefest: Wild Mountain Thyme (2020) PG-13   Rosemary (Emily Blunt), against her family's wishes, is head over heels in love with her neighbor Anthony (Jamie Dornan). The problem is Anthony is cursed, as madness runs in the family, and he remains oblivious to Rosemary and her advances. In walks, an American (Jon Hamm), who wants to buy Anthony’s family farm and also, just might take Rosemary away too. I wanted this film to be as good as its premise, but unfortunately, the film fails to capture any magic that its location of Ireland deserves. The on-location shots are beautiful, but the film never can find its footing, as it tries to get us interested in what the movie feels are star-crossed lovers, but we never quite get a hold of why the characters are supposed to be together in the first place, other than the fact that they grew up next to each other. Christopher Walken plays Anthony’s father, a man who I couldn’t understand where he was coming from, what his reasoning was because he seems to change his mind as many times as he lights a pipe. I love Emily Blunt, and she is the best part of this film, but the chemistry between her and Jamie Dornan isn’t there. In fact, as soon as Jon Hamm shows up, there are more sparks between him and Blunt in just a few scenes than there is for the rest of the movie between the two main characters. The last third of this film will baffle you, making you wonder what the heck happened and also ask: ‘What the heck kind of accent was Christopher Walken using?”   My Rating: Cable    Wild Mountain Thyme Website    The film is currently playing in select theatres including Landmark Midtown Art and Springs Cinema and Taphouse, and is available to rent on participating on-demand services.

Indiefest: Wander Darkly (2020) R   New parents Adrienne (Sienna Miller) and Matteo (Diego Luna) are in a troubled relationship that gets harder when they are forced to reckon with trauma. They must revisit their past while trying to unravel the truth to face their uncertain future. This film takes you a while to get into as Adrienne is dealing with a horrible tragedy, but about halfway through the film, I started to really enjoy the format the movie used to let Adrienne explore her feelings and grief. It’s a film that allows Sienna Miller to shine, and she is brilliant as the difficult, headstrong woman who has trouble even admitting that she loves Matteo, much less think their love can last. What I loved about this film is that we see everything through Adrienne's eyes that it is her story to explore and understand. I wasn’t sure where this film would end up, but I was pleased with the exploration of Adrienne and her life that the movie took us on.   My Rating: Full Price    Wander Darkly Website    The film is available to rent on participating on-demand services

Indiefest: The Dark Divide (2020)  Urged on by his wife’s (Debra Messing) last wish, renowned butterfly expert Robert Pyle (David Cross) barks on a trip he has long put off, to trek through the Gifford Pinchot National Forest. The problem is Robert has never hiked on his own for such a dangerous and lengthy journey, a trek full of beauty and challenges. Oh, man is this a beautiful, gorgeous film to watch that makes me miss movie theaters so much. The scenery is breathtaking, and the musical score is perfect for the film. Shot on location, the film makes the forest its main character, full of beauty but also full of danger and, at times, a mystery. The Dark Divide isn’t a high-action film but a movie about a man who has suffered a devastating loss and has gone on a trip to explore not only the wilderness but also deal with his own personal grief. While a good deal of the film is Robert by himself, he does come across a few people during his travels, and that lets us explore how man deals with the wilderness in various ways. As an Everyman, David Cross is very relatable in the film, as he plays a man who isn’t an outdoorsman but is willing to keep going on his journey of discovery, no matter how hard or scary it gets. If you love the wonder and beauty of nature, along with the exploration of the human character, then this is a film for you.   My Rating: Full Price    The Dark Divide Website    The film is available to rent on participating on-demand services.

Indiefest: Minding the Gap (2018)   Documentary on three young men who grew up together in the Rust-Belt, using their love for skateboarding as an escape from their volatile family life and the adult responsibilities they now have. It would be easy to say that this is a simple film about three young men trying to grow up in a tough time, but that would be too simple. The filmmaker, Bing Liu, uses his camera to explore what it means to be a man in this modern world. Liu explores not only the lives of his two best friends, the easy going Keire and the charismatic but troubled Zack, but also looks at his own unhappy childhood with a father who abandoned his family and a stepfather who beat both Bing and his mother. Liu, as well, turns the camera on Zack, who has a baby with a girlfriend who he constantly fights with, and Keire, a black teen whose own father died just when he needed him the most. Liu was one of those kids who always had a camera on him, so that we see the three grow up before our eyes and how skateboarding became the base of a family that they needed to go to when things got tough. Minding the Gap is a film that is profoundly moving and is brilliantly shot and edited. It is worthy of its nomination at the 2019 Oscars and is worth your spending time with this skateboarding gang.   My Rating: Full Price    Minding the Gap Website   The film is available on the Hulu platform.

Forgotten Film: Heartbreakers (2001)  PG-13 Max (Sigourney Weaver) and Page (Jennifer Love Hewitt) are a mother and daughter con team. Their specialty; Max romances wealthy men into marrying her, and then Page slides in to seduce the husband, thereby letting Max take them to the bank in a divorce settlement. Their next mark is supposed to be their last, a zillionaire named William B. Tensy, who just might bring the con duo down. Two reasons to watch this comedy; Gene Hackman and all the small roles of actors who soon made it big that fill out the supporting cast. Hackman is hilarious as a wisecracking, awful man who can’t stop being a jerk or smoking. The supporting cast includes Sarah Silverman, Zach Galifianakis, and singer/songwriter Shawn Colvin. It’s a fun film that is a little dated, but it is a blast to watch Hackman have so much fun with a role that he obliviously loved playing.   My Rating: Bargain Matinee    Heartbreakers Info

Weird Credits: From the credits of The Dark Divide: Lepidoptera Consultant

Coming Soon to a Screen Near You: Hunter Hunter (2020) Joseph (Devon Sawa), his wife Anne (Camille Sullivan), and their daughter Renée (Summer H. Howell) are a family living in the remote wilderness, struggling to survive as they earn a living as fur trappers. To their dismay, a rogue wolf has returned and is robbing their traps. Joseph leaves his family behind to trap the wolf, with Anne and Renée to fend for themselves in woods that has become dark and deadly. The trailer looks great, and the film seems to have a lot of twists and turns, which should make it a fun, scary ride to watch.     Hunter Hunter Website