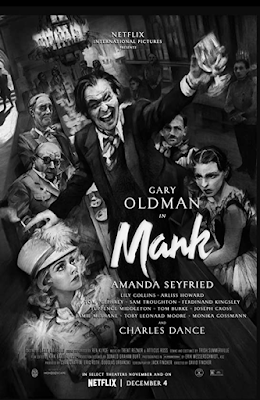 My View: Mank (2020) R   In 1940, with Germany taking over Europe and the US on the brink of entering WWII, Herman J. Mankiewicz (Gary Oldman), some considered the finest screenwriter of all time and others, a washed-up up has-been, is hired to write a script in sixty days. That script was Citizen Kane, maybe the greatest film of all time. As a lover of classic movies, I found this film fascinating with its use of 30s and 40s style filmmaking and the possible origins of a legend of a movie. Director David Fincher, along with shooting in Black and White, uses old-style techniques like montage sequences in the film to give it a classic look and even puts the ‘cigarette burns’ in the upper right-hand corner of the film, which used to signal the person operating the projector that there was a reel change. The dialogue is spot-on, with Mankiewicz spewing one-liners right and left, something his legendary film characters were known for. Gary Oldman gives a masterful performance as Mank, a witty screenwriter who was reckless with both his money and his opinion. The film takes place in 1940 when Orson Welles hire Mank to write a screenplay, while we also flashback to Mank’s early days in Hollywood when he was the toast of the town and was a frequent guest of newspaper mogul William Randolph Hurst and his mistress Marion Davis, a Hollywood star. The film goes back in forth between time periods, giving us the background for a screenplay that would become one of the great films of our time. I loved Amanda Seyfried as Davies, a talented actress who was smarter than she allowed people to see, and Lily Collins, as a plucky British secretary, hired to keep Mank focused on his writing and not on the whiskey bottle. Seyfried is terrific as a woman straight out of a 30s screwball comedy, and Collins reminded me of 40s star Teresa Wright, who seemed to always play the slightly troubled girl next door. Mank is a delight to watch, especially for Oldman’s performance, and a must for any lover of old-school Hollywood films.   My Rating: I Would Pay to See it Again     Mank Website    Available on the Netflix platform and currently playing in select theatres.

My View: Half Brothers (2020) PG-13   Renato (Luis Gerardo Mendez) is a successful Mexican aviation exec that finds out his estranged father is dying. Renato is shocked that he has an American half-brother, Asher (Connor Del Rio), that he never knew about. Now, Renato’s father is sending him and Asher on a scavenger hunt trip to trace the path their father took on his journey a long time ago. Another boring attempt at a road trip picture that never finds its comedic footing and tries too hard to push two opposite characters together to make something funny happen. The storyline is weak, often relying on stereotypes even when making fun of those games stereotypes (stupid Americans think Mexicans in their country zip line everywhere because that’s what the tourists do in Cabo). The filmmakers try on occasion to tackle some serious immigration issues, but they never quite hit any nerves, just a lot of trying to tug on the heartstrings without giving us any heart. The two leads don’t have the chemistry to make the comedic situations funny, and Connor Del Rio comes off trying too hard to be the zany, weird one. I loved some of the scenes in a town I used to visit as a kid, San Miguel de Allende, but those are too far and between many tired, boring bits trying to be funny.   My Rating: Cable     Half Brothers Website    The film is currently playing in select theatres.

Indiefest: Black Bear (2020) R   At a remote lake house in the Adirondack Mountains, a couple (Sarah Gadon, Christopher Abbott) host a filmmaker, Allison (Aubrey Plaza), who wants to spend some time at their house because she is at a creative impasse with her work. Little does the couple know that the woods' isolation will bring out Allison’s inner demons sho could destroy the couple’s peaceful life. This film has quite a few twists and turns, some that I never saw coming. The three leads are outstanding but make no mistake about it, this is Aubrey Plaza’s movie, and she shines in the role. Her character is as complex as the plot is, and Plaza is asked to give us a performance that asks here to turn on a dime, making her character one to watch throughout the film. I don’t want to give away too much of the plot, but it makes for an interesting and sometimes surprising trip.  My Rating: Full Price     Black Bear Info    The film is currently playing in select theatres and is available to rent on participating on-demand services.

Indiefest: Dear Santa (2020)   Documentary on the 100-year-old tradition of the ‘Operation Santa’ program of the United States Post Office, which offers letters from children whom the public can adopt and make a child’s Christmas wish come true. First, this is absolutely a movie you can watch with your kids as the film goes to great lengths to not give away any of Santa’s secrets. The film is a joy to watch as Santa’s ‘elves’ volunteer time and money to make sure that families in need get a Christmas that they will be sure to remember. The film follows some of the volunteers throughout the process, from cities like New York and Chicago to small towns across the country, like the town of Chico, which grew immensely after the devastating fires wiped out so many California homes. The volunteers are wide-ranging, from an elementary school in Brighton Beach, NY, to ironworkers in a big city. You will need to keep your tissues near you as you will surely wipe away a few tears as Santa does his magic.   My Rating: Full Price     Dear Santa Website    The film is currently playing in select theatres and is available to rent on participating on-demand services.

Indiefest: Another Round (2020)   Four middle-aged friends, all teachers, feel that they are in a rut and decide to embark on an experiment from an obscure philosopher: to see if a constant level of alcohol in their blood will help them find happiness and freedom. At first, the experiment seems to work, then that past comes up to the surface, and the friends must decide to face the music or keep going. The idea sounds like fun, and the four friends are happy with the results; they seem freer, able to do their jobs with joyless abandon. Then reality starts to sink in, as the group pushes the boundaries further, they go down a slippery slope that could have some harsh consequences. The characters are multi-layered, and the performances run the gamut of joyful to morose. The film has a sense of humor to it, but at the same time, there is a forbidding that this experiment could come crashing down on the four at any time. Another Round is a film that, at times, you will laugh at and other times will be uncomfortable and might squirm a bit in your seat. Mikkelsen gives a bravo performance that is ripe with emotion and pain.   My Rating: Full Price    Another Round Website   The film is currently playing in select theatres and is available to rent on participating on-demand services on Dec. 18th.

My View: I’m Your Woman (2020) R  Set in the 70s, a young mother, Jean (Rachel Brosnahan), is forced to go on the run with her baby when her husband betrays his partners. The film takes a crime genre and turns it around to focus on a woman who is in over her head. Jean is thrown into a situation that she did not make and one that she might not escape. Along with Jean, we slowly learn more about her situation, and as it goes along, the more hopeless it seems. Brosnahan gives us a woman who at first seems doomed, as she is clueless on how to survive in the mean streets but, Jean is a smart, tough woman who tries to roll with the punches and is willing to do anything so that she and her baby survive. The film has a great supporting cast, as Jean must find some allies to help her survive and figure out what the end game of this adventure is. Jean is far from the wisecracking standup comic that Brosnahan has played in The Marvelous Mrs. Maisel, but she is up to the task and gives us an adventure on the dark side of life.   My Rating: Full Price    I'm Your Woman Website    The film is currently playing in select theatres and is available on the Amazon Prime platform on Dec. 11th.

Forgotten Film: Stories We Tell (2013)  PG-13  In this documentary, Actress/Director Sarah Polley has known that her family has harbored some secrets for some time now. So, Sarah decides to interview members of her family and let them, in their own words, tell what really happened. Stories We Tell is an incredibly moving documentary about a woman who is determined to get to the truth. It’s a fascinating film that explores how people remember events in their lives and how their own beliefs shade those stories. It’s a funny and touching film that is not to be missed.  My Rating: Full Price     Stories We Tell Info

Weird Credits: From the credits of Mank: Table Person

Coming Soon to a Screen Near You: Wild Mountain Thyme (2020) Rosemary (Emily Blunt), against her family's wishes, is head over heels in love with her neighbor Anthony (Jamie Dornan). The problem is Anthony is cursed, as madness runs in the family, and he remains oblivious to Rosemary and her advances. In walks an American (Jon Hamm), who wants to buy Anthony’s family farm and also, just might take Rosemary away too. Hey, a comedic romance with Emily Blunt, Jon Hamm, and Christopher Walken? You had me at Emily Blunt.      Wild Mountain Thyme Website