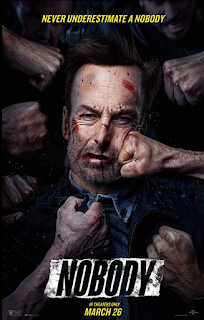 My View:  Nobody (2021) R   Hutch (Bob Odenkirk) is a family man with a boring life. One night his home is invaded by two thieves who threaten his family. After the attack, Hutch is on a bus when a gang of thugs threaten a woman. Hutch is about to awaken something that he has long denied; he loves to get into a fight. OK, when I heard about this film about a seemingly ordinary guy, looking like Bob Odenkirk, could play a tough, kick your ass hero, I had my doubts. However, that’s kind of the point of the character, that Hutch is a guy that looks and acts normal; in fact, he is leading a very dull life full of routine, so much so when he fails to act in a home invasion, his neighbors and his own family knew that Hutch wouldn’t do anything…he’s just not that type of guy. Soon, very soon, we find out that Hutch is a lot more complicated than he shows on the surface. Nobody is in the same vein as the Taken or John Wick films, a man who, when pushed, can react and react very violently. I had fun with this film, and Odenkirk does come off pretty convincing in the fight sequences. Yes, like the Wick films, you have to let yourself enjoy the action and not think about how no one could do all that Hutch does, but that’s part of the fun. The final battle sequence is worth watching the film for, and there are a few surprises along the way that I hope other critics don’t give away too much on. If you are an action fan and don’t mind a bloody body count, then have fun as Hutch ruins a few bad guy's day.    My Rating: Bargain Matinee   Nobody Website   Now playing in select theatres.

My View: A Week Away (2021)   Troubled teen Will Hawkins (Kevin Quinn) finds himself at a Christian summer camp. He thinks about running away, but then he meets Avery (Bailee Madison), and suddenly Will has a reason to stay. This camp is for a week, but it may change Will’s life forever. Just a warning upfront; while not preachy, this film is a very Christian musical with songs sung by the cast from King & Country, Amy Grant, Steven Curtis Chapman, and Michael W. Smith. Amy Grant even makes a quick appearance as a camp counselor. The film centers on Keven Quinn, who has a great singing voice to match his on-screen charisma, and the movie knows it, as it lets Quinn do most of the heavy lifting of the songs. Bailee Madison is enjoyable as the squeaky-clean love interest with some spark showing between her and Quinn. The songs are fun in a ‘High School Musical’ way, and it helps that the supporting cast is rounded out by David Koechner and Sherri Shepherd's performances. I enjoyed A Week Away a lot more than I thought I would, and while the plot is pretty thin, it’s an enjoyable watch.    My Rating: Bargain Matinee     A Week Away Website  Now playing on the Netflix platform.

My View: Bad Trip (2020) R   Chris (Eric André) and Bud (Lil Rel Howery) decide to go on a road trip to New York City to see an old flame or Chris’s (Michaela Conlin). Unfortunately, they borrow Bud’s sister’s car (Tiffany Haddish), who finds out and breaks out of prison to get her car back from the guys. I’m not a big fan of practical joke shows/films like Jackass or Impractical Jokers, and that what this film is mostly about. The plot is a thinly disused ploy to play practical jokes on people not aware that Lil Rel, Tiffany Haddish, or Eric André are acting. If you like watching someone react to a person falling off a wall or an outdoor toilet falling over, then this film is for you. Be warned; this film pushes the gross factor with a lot of practical jokes involving throwing up, crap being flung, and lots of bare butts. I enjoyed Tiffany Haddish playing the tough prisoner on the lam, but even her energy couldn’t bring me to laugh at anything in this film.   My Rating: You Would Have to Pay Me to See it Again     Bad Trip Website   Now playing on the Netflix platform.

Indiefest:   Six Minutes to Midnight (2021) PG-13 In the summer of 1939, school teacher Thomas Miller (Eddie Izzard) takes a last-minute role teaching English at a finishing school on the South coast of England. Even though war is brewing across Europe, the daughters of influential families in Nazi Germany are the school's only students. This kind of reminded me of the old B films of the thirties and forties, films that had serviceable plots, that tried really hard with limited budgets and that didn’t do a whole lot to keep the action and suspense going. The story is pretty weak, and most of the twists can be seen before they happen, but I did enjoy the performances of Judi Dench as the matriarch of the school and Jim Broadbent as a funny local bus driver who knows more than he seems. Izzard is fine as the schoolteacher, and you can see why the class falls in love with his character so quickly. I just wish the plot had a few more twists to make the suspense of the film bigger and more powerful.   My Rating: Bargain Matinee  Six Minutes to Midnight Website      Now playing in select theatres and is available to rent on participating on-demand services.

Indiefest:   Miracle Fishing: Kidnapped Abroad (2020)   In 1994, Miles Hargrove’s father, while working for a non—profit organization in Cali, Columbia, was taken hostage and held for ransom by a group of guerrilla radicals. Using footage that Miles took during the hostage situation, this documentary explores the story of a group of people who work to overcome impossible odds to get Miles's father home. I loved this documentary about a family who, under incredible odds and pressure, try to get their loved one back. The film is comprised almost totally of footage that a young Miles took while the kidnapping negotiations went on (and on). You feel like you are a part of the family, as you get to know everyone involved with trying to get the father released from a group of radicals that are used to kidnappings and getting what they want. One of the family members says during a rather tense time, ‘It’s like a movie unrolling in front of your eyes’ and in fact, due to the unbelievable footage and the expert editing, it is as good as anything fictional that Hollywood could come up with.   My Rating: Full Price     Miracle Fishing Website  Now available on the Discovery+ platform.

My View:    Tina (2021)   Documentary on the legendary performer Tina Turner. From her early days as the front-woman of Ike & Tina Turner to her solo career that had her given the name of ‘The Queen of Rock ’n’ Roll.’ What sticks with you after watching this film is what a fighter and a survivor Tina Turner is. A driven woman, for sure, but one who had the guts to believe in herself and make a comeback, but not as Tina Turner, formerly of Ike & Tina but Tina herself. The film gives us this and more as an insightful look into the life, warts, and all of Tina Turner, from the early years to her retirement. The film is full of amazing clips of Tina and her brilliant performances both as front-woman for the Ike & Tina band and as a solo artist who conquered what few women have done, become a headliner in rock n roll, filling up stadiums and winning awards at an age that most would consider over the hill. Using both an interview done for the film and past interviews, the story of her life is told mainly through her, with a few key people like her biographer, Kurt Loder, and her close personal friends. Tina Turner, because she has been in the public eye for so long, is someone that you think you know, but until you see this film, you don’t really know her at all.    My Rating: Full Price    Tina Website  Available now on HBO and the HBO Max platform.

Forgotten Film: Blume in Love (1973)  R   Stephen Blume (George Segal) is a divorce lawyer who was just caught by his wife, Nina (Susan Anspach), in bed with his secretary. Blume doesn’t want to get a divorce because he still loves his wife, but Nina has other plans, as she takes up with a musician (Kris Kristofferson). Blume is determined, no matter what, to get Nina back. I love this film because of George Segal's performance, who is the perfect sad-sack man who has made a big mistake and must pay for it. He knows he screwed up, but Blume is determined to get Nina back, even if he likes her new boyfriend. Anspach is spectacular as the woman Blume loves, and Kris Kristofferson steals every scene he is in as the man who is everything Blume isn’t, except possibly in love with Nina. Blume in Love is a little dated but worth seeing for Segal in his prime.   My Rating: Full Price    Blume in Love Info

Weird Credits: From the credits of Six Minutes to Midnight: Base Runner

Coming Soon to a Screen Near You: Mainstream (2020) R    A young woman (Maya Hawke) starts making YouTube videos with a stranger (Andrew Garfield), and the videos become a sensation. Things seem great until the dark side of viral celebrity threatens to bring them down. The film is written and directed by Gia Coppola, granddaughter of Francis Ford Coppola.    Mainstream Info