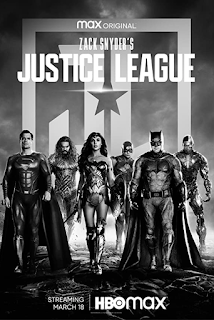 My View: Zack Snyder’s Justice League (2017) PG-13   Batman (Ben Affleck) is inspired by Superman’s (Henry Cavill) selfless act in Batman vs. Superman and decides to enlist Wonder Woman (Gal Gadot) to form a team of superheroes to face an enemy that threatens humanity. Having once, when in film school, thought about making a career as an editor, I have always held the editor’s job in the filmmaking process a key role. I have usually do not like ‘Director’s Cuts’ of films because usually the film gets added footage that can make the film feel bloated or drag the film down. Well, not this time. Zack Snyder’s cut of Justice League is a far better film than the one that Josh Wheadon took over control of five years ago. Yes, the film is a little over four hours old, but it doesn’t feel like it (and by the way, it is made up of sections, so you can pause it if you like to take a break or two). Now in no way, shape or form is it a great film but is it an improvement? Yes, yes, it is. I think the difference is the time we get with each superhero, getting to understand why they do what they do and also, more importantly, why they are willing to become a team when each hero is used to being their own one-man or woman army. I’m still not convinced that Snyder fully understands the Superman character and what he stands for, but I came away enjoying this film, and it’s been enough time since the first version came out that the film felt almost new to me.   My Rating: Full Price (up from the Bargain Matinee that I gave the first version on Nov. 17th, 2017).   Zack Snyder's Justice League Website    Now playing on the HBO Max platform.

Indiefest: Last Call (2021) R    Mick (Jeremy Piven) comes back to his old Philly neighborhood and must decide to help raze the area for a new casino or kiss the big opportunity good-bye and resurrect his family’s bar. This is obviously a passion project for director/co-writer Paolo Pilladi. You can see that he cares about this neighborhood and the characters that inhabit it. Unfortunately, there isn’t much of a story in the plot. The film follows Mick as he goes from one drinking session to another with a bunch of pals from his neighborhood that he left behind to make it good. Mick works for a real estate boss who wants Mick’s help in bringing a casino to the neighborhood. Mick has come back to bury his mother and possibly put his father (Jack McGee) in a home. While back in the neighborhood, Mick rekindles an old romance with the girl next door, Ali (Taryn Manning). There is absolutely no chemistry between Piven and Manning, with their scenes feeling like the two actors who didn’t really want to be in the same scene with each other. The plot is razor-thin, and the ending is so quick and sloppy that you almost get whiplash from it. If you want to watch a film about a bunch of guys ripping on each other and drinking a lot, this is your film; otherwise, you will have a better time going down to the corner bar yourself and having a drink or two.     My Rating: Cable     Last Call Website     The film is currently playing in select theatres and is available to rent on participating on-demand services

Indiefest: Quo Vadis, Adia? (2020)   Aida (Jasna Djuricic) is a translator for the UN in a small town in Bosnia. When the Serbian army takes over the town, Aida and her two sons take shelter in a UN refugee camp. Soon Aida must decide to use her inside information to stay or try an escape with her two sons before it is too late. It is just a heartbreaking story about the love of a mother and wife who tries as hard as she can to save her family against the odds and the bureaucracy of war. Jasna Djuricic is a force on the screen, and her performance is why this film has an Academy Award nomination. The film is filled with sadness and a feeling of lost hope, but Aida never gives up, never stops pleading for the lives of her loved ones to be saved as the clock ticks down to a precious few. Quo Vadis, Adia? is one of the best films of the year and deserves to be seen by everyone.   My Rating: I Would Pay to See it Again  The film is available to rent on participating on-demand services.

My View: Operation Varsity Blues: The College Admissions Scandal (2021) R   This is a documentary that uses reenactments to investigate the mastermind behind the scam to sneak kids of the rich and famous into top U.S. universities. Interesting concept on how to do a documentary, with Mathew Modine playing Rick Singer, the man who set up the scam, using the actual wiretaps to provide Rick’s dialogue. I enjoyed this documentary because it shows how Singer started up this idea to beat the system and just how far the privileged were willing to go, to make sure that their kids could get into the most prestigious schools. This is a strange but fascinating film, giving us a look at an almost fatally flawed system. What is sad is like their parents at a fancy restaurant, the kids in this film could have sat at a table and been just fine; they had to sit at the best table money could buy.   My Rating: Full Price   Now playing on the Netflix platform.

In Memory of Ed Wood (A Movie I’ve Only Seen in Trailers But Just Looks Like a Bad Idea): Hot Water (2021)   A young kid thinks he has what it takes to compete on the pro jet ski tour. With a cast straight out of Baywatch comes a movie with a horrible tag line: ‘The Funniest Ride of the Summer.’ I’ve watched the trailer, and the only thing funny about this film is that it got made.    Hot Water Website

Forgotten Film: Love Jones (1997) R Darius (Larenz Tate) is a young poet in Chicago that meets the love of his life, Nina (Nia Long), a talented photographer, and they have to figure out if their relationships is real and just how deep. What I love about this film is that the couple have real conversations about what they want in life and in other people. They have ups and downs, but you have to trust that someday, someway, they will end up together. Anchored by a great cast, a very cool city, and incredible chemistry between the two leads, and you have one of the better romantic films of the 90s.   My Rating: Full Price    Love Jones Info

Coming Soon to a Screen Near You: Shoplifters of the World (2021)   In the summer of 1987, four friends get together to party and mourn the break-up of the iconic British band The Smiths. Simultaneously, a Smiths fan takes a radio DJ hostage and makes him play nothing but Smiths songs all night. Hey, The Smiths were a great band, and the casting of Joe Manganiello, Nick Krause, Elena Kampouris, James Bloor, and Helena Howard is pretty cool, so I have hope for this one.     Shoplifters of the World Website