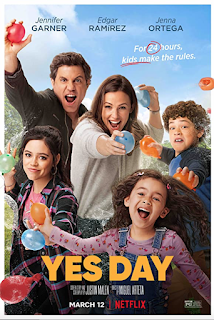 My View:  Yes Day (2021) PG  Allison (Jennifer Garner) and Carlos ( Edgar Ramirez) are parents who decide to give their kids a ‘yes day’ where for 24 hours they have to say yes to everything their kids suggest they do. This is exactly what you think it is, an inoffensive, silly film that kids will love and parents will be bored by. The film starts out with some good ideas, but once the action starts, it just becomes bland. Garner and Ramirez make a good couple, and the kids are cute, but the storyline is dragged down by unexciting events, and the big, teachable, heart-tugging moment that the film needs at the end just kind of sits there. My guess is that the cast had more fun making the film than we have watching it. It would be easy to say Yes Day is a No, but instead, I’ll just say Blah.    My Rating: Cable    Yes Day Website    Now playing on the Netflix platform.

My View:  The Father (2020) PG-13  Anthony (Anthony Hopkins) is set in his ways and does not want help living in his home. His daughter (Olivia Colman) struggles to find someone who will get along with her father, who is starting to lose his grip on reality. I will let you know that this is a tough film to watch, especially if you have ever dealt with the process of parents who are slowly losing their abilities to take care of themselves. Here is the thing, it’s a gut-wrenching watch, but because of the brilliant and beyond moving performances of Hopkins and Coleman, it is worth it. Hopkins is perfect as a man who one moment is charming and lovely, and the next moment is unhappy and angry at the world. Coleman is right there with Hopkins, like a well-rehearsed dance partner who moves and bends with every action that Hopkins's character makes. It is an amazing and brilliant performance by both actors, and they are magical to watch. I don’t want to say too much about the plot in order for the film to play out correctly in front of you as you watch it. I have a feeling that when film historians pull out a performance to show just how great an actor Anthony Hopkins was, this will be the one they show. The Father is a master class in acting and one I won’t ever forget.   My Rating: I Would Pay to See it Again    The Father Website   The film is currently playing in select theatres.

Indiefest:  Kid 90 (2021)   Soleil Moon Frye, at age eight, became a big star on her hit TV show, Punky Brewster. Frye always had a video camera in her hand and shot hundreds of hours of footage of her youth. Now Soleil Moon Frye explores those years of being a kid in Hollywood and its effect on her and other child star lives. This is a film about Frye’s personal journey through her teenage years, growing up in front of us on TV and film, and how that affects a person so young. Using footage that she hasn’t seen in twenty years, Frye looks back at that time and wonders how she and others survived when so many of her friends didn’t, having lost their lives to drugs or suicide. She bravely shows us her life, both the glamorous or funny side, but also the wild side, where we watch as she and her friends drink and take drugs. There are a lot of real and tough moments in the film, but sometimes it feels a bit like a vanity project for Frye, as the spotlight is almost always on her, even when she interviews people like Mark-Paul Gosselaar or Brian Austin Green. Overall, fans of Frye will be happy to go down memory lane with her; others may be a little bored as the shaky home movies continue to roll by.    My Rating: Bargain Matinee    Kid 90 Website   Now playing on the Hulu platform.

Indiefest:  Come True (2020)   Sarah (Julia Sarah Stone) is struggling at school and cannot go home when she finds shelter at a university sleep study. Hoping to cure her nightmares, instead, Sarah unwittingly becomes the channel to a horrifying discovery. Would you want to see your nightmares replayed before your eyes? This horror/sci-fi film asks that question, and like Sarah in the film, you might not want to say yes. I wish I had watched the film in a theatre because the dream sequences need to be seen on the big screen to let the horror creep up on you. I loved Julia Sarah Stone in the role of a young woman who is having trouble at home and can’t find a place to sleep without her dreams/nightmares invading her life. There are plenty of twists and turns in the plot to keep you interested. The film slows a bit down near the end of the film, and there is a relationship turn that I didn’t like, but there is a lot more to this film than just a night or two of restless sleep to explore; there are nightmares that might come true.    My Rating: Bargain Matinee     Come True Website   The film is currently playing in select theatres and  is available to rent on participating on-demand services.

Forgotten Film: The Amateurs (2005) R  Andy (Jeff Bridges) is having a mid-life crisis and is tired of not having money, so he decides that he and his small town's pals should make a full-length porn movie. First off, the cast is amazing: Ted Danson, Joe Pantoliano, William Fichtner, Patrick Fugit, John Hawkes, Glenne Headly, Lauren Graham, and Jeanne Tripplehorn. I love that most of the characters are named after characters from the old Andy Griffith Show. Jeff Bridges is the star of the film, but Ted Danson is the standout of a gay guy named Moose that goes around the town and tries to convince the women of the town to be in the film. The Amateurs is just a fun film with a lot of heart and is filled with a lot of laughs.   My Rating: Full Price     The Amateurs Info

Weird Credits: From the credits of Come True: Sleep-caps designed and created by

Coming Soon to a Screen Near You:  Happily  (2021) R   Tom (Joel McHale) and Janet (Kerry Bishe) are one of those couples that, after years of marriage, still enjoy each other’s company so much, they kind of make their friends jealous. Then one day, a mysterious man (Stephen Root) shows up at their door, offering the couple a way to make their relationship like everyone else’s; miserable. Just the cast alone makes me want to see this ‘dark romantic comedy’ which includes Natalie Morales, Charlyne Yi, Breckin Meyer, Brea Grant, Jon Daly, and Paul Scheer.     Happily Info