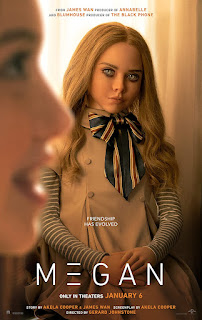 My View: M3GAN (2023) PG-13 Gemma (Allison Williams), a robotics engineer, suddenly becomes a caretaker of her orphaned 8-year-old niece, Cady (Violet McGraw). Gemma realizes she is unprepared to be a parent and decides to pair her robotic companion prototype M3GAN with Cady. It’s a pairing that will become deadly. January is usually a place where horror films go to die. It’s a time when studios look to make a quick buck on a low-budget scary film before the serious competition comes back to the theatre. That’s why M3GAN is such a surprise! It’s a film that has fun with what it is trying to do, making a horror film about a creepy doll that is scary just to look at her. Full of humor and some cool special effects, we have a horror star who makes Chucky look like an amateur. There are plenty of scares and some unbelievably creepy scenes with M3GAN, like when she dances in the hallway right before killing a few people. M3GAN has some things to say and sing about the state of parenting today while winking at us that this is just a movie, though a scary one. So go meet your new best friend and welcome M3GAN to the family. I guarantee you may think twice about interacting with Alexa or Seri again. And I hope there is a MEGAN4, or would it be M4GAN?   My Rating: Full Price  M3GAN Website  Now playing in theatres nationwide. 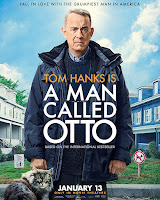 My View: A Man Called Otto (2022) PG-13 Otto (Tom Hanks) is a grumpy old man who just wants to be by himself after the loss of his wife. Otto’s world will be turned upside down by a new family next door and a cat that won’t leave him alone. After two horrible performances in the Robert Zemeckis film Pinocchio as Geppetto and Colonel Tom Parker in Elvis, I was wary of this remake of a two-time Oscar-nominated Swedish film called A Man Called Ove. I’m happy to report while not a great movie, this remake is likable, and so is Tom Hanks. Hanks plays a man mourning his wife's death and takes it out on his neighbors or anyone else who disagrees with his viewpoints. Along comes a family that somehow, someway, melts Otto’s heart a bit, and he begins to warm up, though it’s a really slow thaw. The reason to see this film isn’t Hanks and his performance; it's Mariana Treviño, who plays the new neighbor who won’t take Otto being a cranky old man anymore. Treviño is a joy to watch as she brings life to the neighborhood and to the film itself. It’s a magical performance, and I can’t wait to see her in more roles in the future. The film isn’t as good as the original (Ove is much worse as a person than Otto, so the turn is even better), but the film hits all the right spots, and you won’t go away disappointed, though you may need a few tissues a time or two.   My Rating: Bargain Matinee  A Man Called Otto Website  Now playing in select theatres and nationwide on Friday, January 13th. 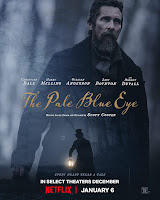 My View: The Pale Blue Eye (2022) R  In 1830, a former West Point cadet and now detective, Augustus Landor (Christian Bale), is hired to investigate the suicide of a West Point cadet. Augustus discovers this isn’t an ordinary case of suicide and insists on another cadet to help him solve the possible crime. That young cadet’s name is Edgar Allan Poe (Harry Melling). I enjoyed this film, mostly because I love mysteries that involve famous people (I read a lot of crime novels that do the same thing). The film has plenty of twists and turns to keep you interested, and the interplay between Poe and Landor is fun. It’s hard to upstage Christian Bale, but Harry Melling does a great job creating Poe as a likable character that makes the film work. I thought the cinematography was outstanding, capturing the look and feel of a very cold, dark New England in the 1800s. The final act is a little disappointing, but still, I had a good time trying to figure out the mystery along with Augustus and Edgar.  My Rating: Bargain Matinee   The Pale Blue Eye Website  Now playing on the Netflix platform.

Indiefest: The Old Way (2023) R Colton Briggs (Nicolas Cage) was one of the most feared gunfighters before he decided to hang up his guns and get married. Colton’s past comes back to haunt him when the son of a man Colton killed returns to exact revenge, resulting in the death of Colton’s wife. Accompanied by his daughter, Brooke (Ryan Kiera Armstrong), Colton is on a mission to find his wife's killer and avenge her. I love westerns and Nic Cage, but in this case, the two don’t make for a good picture. The film is about a man who changed his ways due to meeting his wife, and now that she is gone, he has returned to being, as he describes to his daughter, ‘dead inside.’ The film has way too many scenes where the characters sit around and talk, and too few action sequences, making the film feel slow and unmoving. I did like Ryan Kiera Armstrong, the headstrong daughter who talks her way into joining her father on his trip to revenge. Armstrong holds her own in scenes with Cage (not an easy thing to do) and is the bright spot of a film that takes too long to develop.  My Rating: Cable   The Old Way Info  Now playing in select theatres and available On Demand on January 13th.

Forgotten Film: Joe Gould’s Secret (2000) R In 1940, a The New Yorker staff writer, Joseph Mitchell (Stanley Tucci), hears about a man, Joe Gould (Ian Holm), who is writing an Oral History of the World from his over twenty-thousand conversations he’s had and overheard. Joseph is about to meet a man who is many things, but is he a writer or a con man? This is a fascinating film directed by Stanley Tucci about Joseph Mitchell and his meeting a man who will change Joseph’s outlook on life and views of how the world operates. Holm is brilliant in the role of Gould, a man Joseph hopes is telling the truth about his book, but the more he spends with Joe, the less he feels the book is real. The film has an outstanding cast, including Patrias Clarkson, Hope Davis, Susan Sarandon, Sarah Hyland, and Steve Martin.  My Rating: Bargain Matinee  Joe Gould's Secret Info

Weird Credits: From the credits of M3GAN: Puppet Hair

Coming Soon to a Screen Near You: Maybe I Do (2023) PG-13 Michelle (Emma Roberts) and Allen (Luke Bracey) have been dating for a while, and they decide it’s time to decide if they should get married or breakup. They invite their parents to meet and help them figure out their relationship. It turns out the parents know each other well, in fact, too well. The cast includes Richard Gere, Diane Keaton, Susan Sarandon, and William H. Macy. That’s enough right there to see this film.    Maybe I Do Info   In theatres late January, 2023.