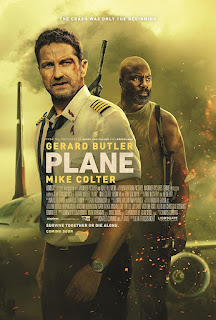 My View: Plane (2023) R Brodie Torrance (Gerard Butler) is an airline pilot who always puts his passengers first. When his plane encounters horrible storms, Brodie is forced to land the plane in a foreign country controlled by a powerful warlord. Brodie’s only ally to save his passengers is a convicted murderer (Mike Colter). Okay, you know what you are getting when you see a Gerard Butler film with a one-word title. It’s going to be a little dumb and you might laugh at the silliness of it all sometimes, but you will have fun. Butler plays an earnest pilot who puts his passengers above all else. What I liked about Brodie is that he isn’t your ordinary hero from this type of film. He isn’t a former special forces guy, just a guy who wants to rescue his passengers. Luckily for those passengers and us, Brodie does have a guy like that next to him in the convicted murderer, played by Mike Colter (Luke Cage Tv series), who we find out is a former French Foreign League soldier. The action, including some very well-done flying sequences, is fun, and the bad guys are just evil enough for you to hate immediately. So make sure your tray table is up, your belongings are secured, and your seat belt is on because it’s going to be a bumpy ride on ‘Plane.’   My Rating: Bargain Matinee  Plane Website  Now playing in theatres nationwide.

My View: Dog Gone (2023)   A father (Rob Lowe) and son (Johnny Berchtold), whose relationship is in pieces, are forced to travel the Appalachian Trail to search for their beloved lost dog. Finding the dog is not the only problem, as the dog will die in less than two weeks if he doesn’t get his medication. It’s a story that captured the world’s heart. The film is based on a true story, and I will admit (as a dog lover) that I did tear up a few times, as it’s a remarkable story of a dog that winds up incredibly far from where he was lost. The film is more about the reconnection between a father and son than a lost dog story. If fact, other than a few scenes of Gonker (yeah, that’s the dog’s name) lying down in the woods for the night, we only follow the father and son traveling around handing out flyers while the mother (played by Kimberly Williams-Paisley) handles the phones and coordinates the search. The film feels like there is more to the story of what is causing the problems between the father and son, but things get fixed pretty quickly, a little too easily. Still, you will probably need a tissue or two. And the dog is pretty darn cute.   My Rating: Bargain Matinee  Dog Gone Website  Now playing on the Netflix platform. 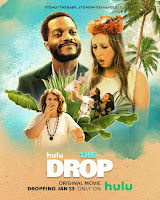 My View: The Drop (2022)  Mani (Jermaine Fowler) and Lex (Anna Konkle), a couple, are on a trip to see friends get married on a tropical island when their relationship is tested when one of them drops a baby. This is a film about relationships and how we often think they are perfect, but we can’t see the problems that keep popping up as we pretend to be happy. Mani and Lex seem to be a perfect couple, in love and trying to get pregnant. However, when one of them drops a baby on her head (she is fine), things go downhill quickly. The film starts out a lot of fun, and there is a plane ride where we get to see the group together (most are former college pals who apparently have all slept together), which is hilarious. Unfortunately, the film goes a bit downhill at that point, turning into a bit of a black comedy that goes off into some rather icky subjects, and it is very apparent the cast is doing quite a bit of improvising (a couple of times that improvising just grounds the film to a halt). It’s kind of weird to say, but the film went off the rails when they dropped the baby.   My Rating: Cable  The Drop Website  Now playing on the Hulu platform.

Indiefest: Saint Omer (2022) PG-13   Rama (Kayije Kagame) is a novelist researching her next work at the trial of Laurence Coly (Guslagie Malanda), who is accused of drowning her child. Laurence claims she did it because of demons. This is a film you watch knowing that it will not give you all the answers you want, and you are ok with that. Set mainly in a courtroom, the film is a long look at two women bound by motherhood. The film asks you to let it slowly reveal the facts of the case in the trial, and then you have to decide if you feel the woman accused is guilty. Saint Omer is a gritty look at something shocking but asks you to look with compassion. What I loved about this film is that we get more information from the faces of the two actors than from what they say or do. It’s a blow to your gut, but this film is worth watching.   My Rating: Full Price   Saint Omer Website  Now playing in select theatres.

Indiefest: Broker (2022) R  In Broker, a young woman, So-young (Ji-eun Lee), leaves a baby at an adoption drop-off. Her baby is taken by a team of brokers (Song Kang-ho, Dong-won Gang) who steal infants left off for adoption and then sell the babies to parents wanting children, who the official process has denied. Little do the baby snatchers know that they are being watched by a couple of detectives trying to bring the snatchers to justice. This is a challenging film to describe as the cast of characters gets larger as the film goes along. Every character in this film has a flaw, and they are all on a collision course that will not end well. This is a film about finding family where you can find it and how hopelessness can propel you to do things you thought you never would do. Broker is a beautifully acted film with some outstanding performances, including Song Kang-ho, playing a man who desperately needs money but has a heart that makes him make choices that we know he will end up paying for. Song Kang-ho plays off the rest of the cast with ease, and it’s his charm that overwhelms you on the screen. Broker is a film you know will probably end in heartbreak, but you are willing to go along for the ride just to find out if it does happen.   My Rating: I Would Pay to See it Again   Broker Website  Now playing in select theatres.

Indiefest: Women Talking (2022) PG-13 Women Talking takes place in 2010, where the women of an isolated religious community must decide on one of three things: do nothing, stay and fight, or leave. A group of women are meeting to decide what to do after discovering that the religious sect's men have done something horrible. At first, we think the women are from the 19th century, but we soon find that the women in this sect are entirely isolated from the rest of the world, with no knowledge of what it’s like in the modern world, not able to read, write or even read a map. Filmmaker Sarah Polley brings us a talkfest of a tale about women trying to figure out an almost impossible situation. The cast, including Jessie Buckley, Rooney Mara, Judith Ivey, Claire Foy, and Frances McDormand, are given amazing speeches that seemed to flow out of the women. Unfortunately, while the performances are brilliant, I found the film a bit too much like a stage play, with almost the whole movie taking place inside a barn. Of the cast, Rooney Mara, who plays a pregnant woman constantly putting down the rest of the women, and Jessie Buckley, who is in an abusive relationship, stand out. I wish this outstanding cast had been given more to do than give speeches to each other. Still, the slowness of the plot doesn't overshadow the incredible performances that make Women Talking worth watching.   My Rating: Full Price   Women Talking Website  Now playing in select theatres.

Forgotten Film: When Eight Bells Toll (1971) GP  When ships carrying gold bullion go missing off the coast of Scotland, the Treasury department sends in their best man, Philip Calvert (Anthony Hopkins), to investigate. Calvert hides on the next ship carrying the gold and finds himself knee-deep in bad guys. Based on an Alistair MacLean book (he also wrote the screenplay), the movie attempted to start up a new James Bond-like character in Philip Calvert, hoping for a series of films. The film didn’t catch on, and we never got to see Anthony Hopkins kick butt like this again. It’s a fun film, reminiscent of the other Alistair MacLean-based movies like Ice Station Zebra and The Guns of Navarone, and Hopkins is rather dashing as the secret agent.    My Rating: Full Price  When Eight Bells Toll Info

Weird Credits: From the credits of Plane: Scenics

Coming Soon to a Screen Near You: Bosch & Rockit (aka: Ocean Boy) (2022) in the last summer on the Australian coast, Bosch (Luke Hemsworth) goes on the run, wanted for dealing drugs with his surf gang. In tow is his son, Rockit (Rasmus King), who has no idea what his father has done and thinks he is on a magical vacation with his dad. I want to see this film just for the location shots alone.    Bosch & Rockit Info  In theatres in early February.