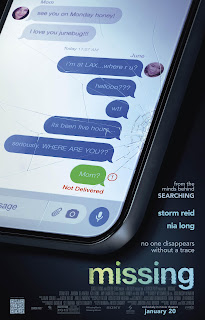 My View: Missing (2023) PG-13  When her mother (Nia Long) disappears while on vacation in Colombia with her new boyfriend (Ken Leung), June (Storm Reid), stuck thousands of miles away in Los Angeles, uses everything she can to search for answers. The further June digs, the more questions she gets, and June soon learns that she never really knew her mom at all. This film uses the same idea that a 2018 film that I liked a lot, Searching, did, where our protagonist stays at home and uses a computer to put the pieces together to find their loved ones. Both films had solid leads, and Storm Reid does a fantastic job as the young teen who uses her willpower and knowledge of the Internet to discover what happened to her mother. The film takes various twists and turns that keep you guessing until the end. I was pleasantly surprised by how well the film flowed and how the movie kept our interest in the chase to find June’s mom. It’s a nice touch to have Joaquim de Almeida as Javi, the guy June hires (at a very cheap rate) to be her eyes and ears on the ground in Columbia, where June’s mother went missing. Having that interaction gave us a chance to understand better June’s pain of losing her father and her terror of possibly now losing her mother. So please turn off your cell phone (because June will do enough web surfing for all of us) and see Missing.   My Rating: Full Price  Missing Website Now in theatres nationwide.

Indiefest: Living (2022) PG-13  Set in 1950s London, where Williams (Bill Nighy) has always prided himself on his work ethic, attention to detail, and not letting anything get personal. Williams finds out some shocking news, and he explores how to better his life and help people around him. Bill Nighy gives us another one of his brilliant performances as Mr. Williams, a stuffy, by the letter, civil servant who rules his little office like it’s a fiefdom. Some horrible news turns Williams’s life upside down, and he decides that maybe it’s time to take a chance and make a difference in this world. This is a film about redemption, about making choices to change and trying to connect with people, no matter how small the gesture is. Based on the classic Kurosawa film Ikiru, Bill Nighy gives us a performance for the ages, and he does more with just sitting in a park by himself than most actors speaking tons of lines. It’s a magical ride that Nighy takes us on, and that will make you feel you could do something nice for someone today which could make a difference in their lives. All it takes is taking an interest in someone.   My Rating: Full Price  Living Website  Now in select theatres. Indiefest: Alice, Darling (2022) R  Alice, Darling is about a young woman (Anna Kendrick) who is in an abusive relationship that could become deadly, but doesn’t want to see the warning signs. Her friends stage an intervention at a weekend getaway to make her realize she is in trouble, but her boyfriend shows up unexpectedly, which could get ugly. I’m a big fan of Anna Kendrick and always love when a film challenges her to do more than just be cute. In Alice, Darling, Kendrick gives us a woman who is suffering not from physical abuse but the constant abuse of psychological means, where she has been conditioned to question every move she makes. The man she loves controls her whole life. However, Alice decides to go on a weekend getaway with her two best friends, Tess (Kaniehtiio Horn) and Sophie (Wunmi Mosaku), who have seen firsthand how controlling Alice’s boyfriend, Simon (Charlie Carrick), is. To do this, Alice lies about a business trip. A lie that she will soon regret. It’s a fine performance by Anna Kendrick, but I expected more from the film, as the final confrontation feels shallow and not the cathartic release I wanted. It’s an interesting performance that is let down by a script that didn’t know how to finish.   My Rating: Bargain Matinee  Alice, Darling Website  Now in select theatres.

Indiefest: When You Finish Saving the World (2022) R  Ziggy (Finn Wolfhard) is a teen who lives for making music for his online fans. Ziggy thinks he is successful because of how many fans follow him, but his idea of happiness is about to change when he meets a fellow student named Lila (Alisha Boe), who sees something more in Ziggy. This is all the while Ziggy’s mom (Julianne Moore) tries to help a young teen (Billy Bryk) while working at a domestic abuse shelter. This film is about a bunch of self-centered people who want to impress someone but can’t keep the spotlight off of themselves. There are some wonderful performances in this film, especially Julianne Moore, the mother of Ziggy, who can’t connect with her son on any level. Still, instead of trying to fix that relationship, she fixates on another teen, trying to make him into the son that she wants. The problem is that the script, written and directed by Jesse Eisenberg, can never figure out where it wants to go, and we can’t get a handle on what makes these characters think the way they do. All I know is that after an hour and a half, I didn’t want to spend any more time with them because I didn’t like them. I just didn’t care if they succeeded or changed, and regardless of the ending, I’m not sure they ever will.  My Rating: Bargain Matinee  When You Finish Saving the World Website   Now in select theatres.

Indiefest: After Love (2020)   Set in the port town of Dover, England, where Mary (Joanna Scanlan) is grieving the loss of the love of her life, her husband, Ahmed. Going through his wallet, Mary finds an ID card belonging to a French woman, a secret Ahmed kept just twenty-one miles across the English Channel in Calais. Joanna Scanlan gives us a heartbreakingly wonderful performance of a woman who learns that her husband had a secret that she decides she must explore herself. This film is about love, trust, and that everyone has secrets, but some are so devastating when they are found out. I don’t want to give too much out, but let’s just say that the film goes down a road where Mary finds herself in the position of whether to go along for the ride or reveal everything. It’s a decision Mary must make quickly, which will have far-reaching consequences. About Love is a film that moves slowly but with heart and substance, with Scanlan giving us an incredibly moving performance that gets better by the minute.   My Rating: I Would Pay to See it Again  After Love Website  Now in select theatres.

Indiefest: The Son (2022) PG-13 Peter (Hugh Jackman) and his partner Beth (Vanessa Kirby) are struggling along with a new baby when Peter’s first wife, Kate (Laura Dern), tells Peter that he must take their teenage son, Nicholas (Zen McGrath). Kate has run out of ideas to help Nicholas, who suffers from depression, and the hope is that Peter can reach him. Peter hopes to be a better father than his dad and find a way to help Nicholas. I thought this would be a sequel of sorts to filmmaker Florian Zeller’s 2020 film The Father because of the title and the fact that Anthony Hopkins, the star of that film, plays a father in this film. This is not the case, and Hopkins, though a delight to watch in a very evil role, is only in one scene in The Son. Hugh Jackman puts everything he has into the role and gives one of his best dramatic performances. Jackman provides us with a performance that starts with empathy and a sureness that borders on cocky but ends with confusion and, yes, pain. I just wish it was in a better film. The film should have been The Father II, as the focus is not on the son, a deeply depressed teen, but on Peter, the father, and how he deals with someone he loves who is having trouble with life. As hard as Jackman and Laura Dern try, I never connected to the couple and didn’t get the emotional impact I wanted from the film. The film feels shallow and gives us an ending I felt cheated by. As good and spellbinding The Father was, The Son feels so much less. My Rating: Bargain Matinee  The Son Website  Now playing in select theatres.

Forgotten Film: I Capture the Castle (2003) R  Set in 1930s England, 17-year-old Cassandra (Romola Garai) lives in a rundown castle with her very eccentric and growing poor by-the-day family. Her father (Bill Nighy) is a novelist who hasn’t written a word in 12 years. Her sister (Rose Byrne) has boys on the brain and is mad at the world, and Cassandra’s stepmother is a nudist. Into the madness come two Americans (Henry Thomas, Marc Blucas) who could change the family’s fortunes if the girls can get the boys to fall in love with them. I Capture the Castle is a fun romantic story based on the book by Dodie Smith, and Romola Garai is terrific as the fiery Cassandra who loves her family but wants to see the world and write about it. The dinner sequence where the two families get together is the highlight of the film and is hilarious. I Capture the Castle is a sweet look at first love and what we do to make our families happy. My Rating: Full Price   I Capture the Castle Info

Weird Credits: From the credits of Living: Home Economist

Coming Soon to a Screen Near You: The Amazing Maurice (2022) PG A talking tomcat named Maurice goes on an adventure with a kid who has a group of rats following him and a young woman who loves mysteries. Based on the beloved book by Terry Pratchett and with a voice cast that includes Hugh Laurie, Gemma Arterton, Emilia Clarke, Hugh Bonneville, and David Tennant, this should be a lot of fun. Coming to theatres in early February.  The Amazing Maurice Website 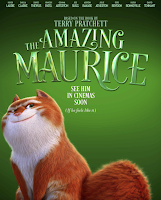