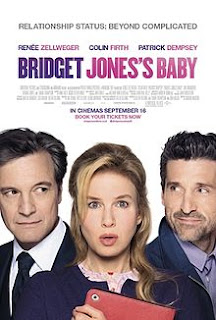 My View:  Bridget Jones’s Baby  (2016) R  Bridget (Renee Zellweger) is 43 and single again after breaking up with long-time boyfriend, Mark Darcy (Colin Firth). Her fortune seems to change when she meets the handsome American named Jack (Patrick Dempsey).  Nothing, though, is ever easy for Bridget, and, suddenly, she realizes she is pregnant and doesn’t know which of the two men are the father. I enjoyed this funny film, mostly due to the slapstick abilities of Zellweger who is brilliant in this movie. Patrick Dempsey, as the cocksure relationship expert Jack is perfect as the opposite of the restrained and stiff Colin Firth’s Mr. Darcy. I was almost on the floor laughing at one scene which involves a revolving door and a very pregnant Bridget. While it doesn’t quite have the charm of the first film, Bridget Jones’s Diary  (2001), it’s still a great addition to the Jones’s film legacy.   My Rating:  Full Price    Bridget Jones's Baby Website

My View:  Blair Witch  (2016) R  After seeing a video of his sister and her experiences in the woods of Blair Witch, James (James Allen McCune) sets out with friends to find his sister.  It could be the last thing he does in his life. If you are prone to motion sickness, then pass this film by because just like the first “found footage” film, The Blair Witch Project (1999), this is a movie that is all hand-held camera-work. Instead of just one camera, this film has more than you can count, including little ear piece cameras and a drone that allow the director, Adam Wingard, to get even more angles to add to the scary parts of the film. Unfortunately, the film comes off as almost a retelling of the first (with just more camera viewpoints), and I never really got scared. The first film was groundbreaking and scary as heck, but this movie comes off as a tired copy.    My Rating:  Cable   Blair Witch Website

My View:  Snowden  (2016) R  Based on a true story of an American computer professional named, Edward Snowden (Joseph Gordon-Levitt), who believes that the U.S. government was illegally collecting data on its citizens.  Snowden decides to steal classified information from the National Security Agency and release it to the British newspaper, The Guardian. My biggest problem with this film is that about a third of the movie takes place in the hotel room where Snowden hid out while The Guardian was releasing the data. We have already seen these scenes in the Oscar-winning documentary Citizenfour (2014) by Laura Poitras (portrayed in Snowden by Melissa Leo). So why would I want to see a dramatization when I have witnessed the real thing, which by the way had far more tension than Snowden? The film wastes excellent performances by Joseph Gordon-Levitt and Shailene Woodley. There is also a fun portrayal of a CIA instructor by Nicolas Cage, though his scenes are too few to make any lasting impact. I came away from this film learning very little about Edward Snowden that I didn’t already know. Maybe it’s just too soon to make a movie about things that just went down a few years ago.    My Rating: Bargain Matinee    Snowden Website

Indiefest:  Kicks  (2016)  R  Brandon (Jahking Guillory) is a 15-year-old boy living in L.A. who dreams of one day owning a pair of Air Jordans.  Brandon is convinced his life will change if he can just make enough money to swing buying the shoes. While he is right, his life isn’t about to get easier but real complicated real after he gets his “kicks.” This is a gritty, tough film to watch due to its hard-hitting portrayal of life in L.A. Be warned - the kids in this movie live a hard, rough and tumble life, filled with violence and alcohol. It’s a tale of revenge and the quest of a young boy to find his place in this world full of hazards. I did like the way the film was broken up into chapters by hip-hop/ rap songs, and the satisfying ending was the best part.   My Rating:  Bargain Matinee    Kinks Website

Indiefest:  The Hollars  (2016)  PG-13  John Hollar (John Krasinski) is a struggling New York City graphic novelist who is forced to move back home when his mother (Margo Martindale) is diagnosed with a brain tumor. Returning home brings back all the old problems John had with his family and friends before he left for the big city. Complicating matters is his girlfriend (Anna Kendrick), whom he left in New York, just might be pregnant. With a cast that includes Richard Jenkins, Josh Groban, Charlie Day and Sharito Copley, this film should have been better. There are some funny scenes and a few touching ones, but, overall the film never quite finds its footing. Martingale gives a remarkable, moving performance as the mom who holds the family together, and Josh Groban gives a surprisingly winning performance as a youth pastor who helps Copley’s character deal with his failed marriage. Unfortunately, most of the characters come off as very two-dimensional, shallow portraits that don’t help move the story along. This is John Krasinski’s second attempt at directing a feature film (his first was 2009’s Brief Interviews with Hideous Men), and it’s obvious that he needs to work on his directing skills.   My Rating: Bargain Matinee   The Hollars Website

Indiefest:  Demon  (2014)  R  Peter (Itay Tiran) has come from England to Poland to get married to Zaneta (Agnieszka Zulewska). He has been given an old home by his father-in-law, and the wedding ceremony is to take place at the house. One night, Peter finds some old bones buried on the grounds and wakes up in the house with no knowledge of what went on. As the ceremony and the reception go on, the bridegroom becomes possessed by something. It’s a night that the families of this small town will ever forget. This is a strange film that doesn’t always work ( a lot of time is spent leading up to Peter’s possession which slows down the movie). The film is beautifully shot, with lots of strange and creepy shadows contributing to the overall feel of the film. There is an underlying message about giving one's self up to marriage but I never quite figured out what exactly the filmmaker was trying to say. There are a few scary moments but the film never can build momentum, and the ending feels abrupt and unsatisfying.    My Rating: Bargain Matinee  Demon Info 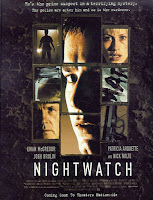 Forgotten Film:  Nightwatch  (1997)  R  A law student, Martin(Ewan McGregor), takes a job as a night watchman at a morgue.  He finds himself in the midst of a murder mystery, one where he becomes the main suspect. A detective (Nick Nolte) is obsessed with finding the murderer, and he becomes Martin’s only hope. A great cast that includes Josh Brolin, Lauren Graham, and Patricia Arquette make this film a watch, especially with all the twist and creepy turns.   My Rating:  Bargain Matinee   Nightwatch Info

Coming Soon to a Theatre Near You:  The Lovers and the Despot  (2016)  Documentary of the story of a famous film director and an equally famous actress who are kidnapped and forced to make films in North Korea for movie-obsessed dictator Kim Jong-il. Having seen the fascinating documentary on North Korea called, “Under the Sun,” I am looking forward to seeing this film.   The Lovers and the Despot Info 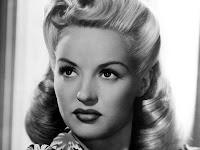