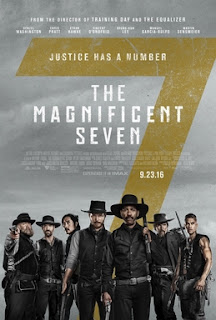 My View:  The Magnificent Seven  (2016) PG-13  The small, western town of Rose Creek is under the clutches of industrialist Bartholomew Bogue (Peter Sarsgaard).  In desperation, the townspeople turn to employing seven outlaws, bounty hunters, and hired guns, to protect them. Against the odds, the seven gunfighters may win this battle, but, at what cost?  This film is a little bit of a letdown.  It’s too long and not enough of the characters, especially Bogue, the villain of the story, are terribly interesting or intriguing. I was disappointed especially in Chris Pratt’s performance which is very low key. I wanted him to be much more fun and over the top. Vincent D’Onofrio steals the movie as a bombastic trapper.  D’Onofrio looks like he is the only one in this film who is actually enjoying his part. I did get into the well-choreographed big fight sequence at the end, but it took way too long to get there.  The title of the film should have been The Ordinary Seven.  My Rating:  Bargain Matinee   The Magnificent Seven Facebook Page

Family Faire:  Queen of Katwe  (2016) PG The film follows the life of Phiona Mutesi (Madina Natwanga), a Ugandan chess prodigy from Katwe who becomes a Woman Candidate Master after her performances at World Chess Olympiads.  This film works because the film treats its subject with such a loving touch. The fact that this is a true story makes it all the more uplifting and impressive. It’s a charming and inspirational film that will have you rooting for the underdog, a young woman with an extraordinary skill and an impressive drive to be the best. It’s a movie you can take your whole family to (though young kids will be bored at times) and enjoy this extraordinary and moving tale of triumph over unbelievable odds.   My Rating:  Full Price   Queen of Katwe Facebook Page

Indiefest:  Tanna  (2015)  Set in the South Pacific, Wawa, is a young girl from one of the last traditional tribes. She falls in love with the chief’s grandson, but, when an inter-tribal war starts up, she may be wed to a rival group to make the peace.  The young lovers must decide to run away or put their love of their tribe ahead of their love for each other.  This is a beautiful looking film, but unfortunately, the film isn’t a documentary but a fictional work about two star-crossed lovers. The film is slowly paced and spends much of its time following the day to day operations of the tribe, making the film seem almost like a travelogue rather than a touching love story.   My Rating:  Bargain Matinee   Tanna Facebook Page

Indiefest:  Author: The JT LeRoy Story  (2016)  R  JT Leroy was the hit of the literary world. Having lived a life of prostitution, drug addiction, and vagrancy, he hit the literary scene with a series of articles and his first novel, “Sarah.” Then it was discovered that JT LeRoy wasn’t a real person but the creation of author Laura Albert. This documentary explores this fascinating story.  This is an improbable and absurd story that, if you made it into a fictional narrative, you wouldn’t believe that it could happen. The film is greatly enhanced by all the phone calls that Albert recorded (most apparently, without their knowledge), including those with celebrities such as singer Tom Waits, director Gus Van Sant, singer Courtney Love and even U2 lead singer Bono. Through those phone calls, we see just how much everyone that “JT” talked to wanted to believe that he was real. The web of lies that Albert weaves is immense and goes on far longer than you think it could. This is one of the most engaging and engrossing film I have seen in quite a while and should not be missed.   My Rating:  I Would Pay to See it Again   Author: The JT LeRoy Story Website

Indiefest:  Goat  (2016)  R  After getting over a terrifying assault during the summer, 19-year-old Brad (Ben Schnetzer) starts college.  His older brother, Brett (Nick Jonas), is in a fraternity and very popular on campus. Brett talks Brad into pledging to his fraternity and what happens during “Hell Week” will change both their lives forever. I have never been a fan of fraternities and this film just reaffirms my dislike. That being said, this is an intense and scintillating film that explores a young man’s attempt to deal with the attack while all the while enduring the hazing of the frat. Schnetzer gives an impressive performance as the damaged Brad, creating a character that seems to observe more than participate. Nick Jonas, as the protective and much cooler brother, is perfect in the role. Goat is an engaging and thought-provoking film. You might not want to pledge, but you will want to know what happens to Brett and Brad.  My Rating:  Full Price   Goat Facebook Page

Forgotten Film:  One False Move  (1992)  R  A trio of criminals (Billy Bob Thornton, Michael Beach, Cynda  Williams) commit a string of murders in L.A. to grab a large batch of drugs.  They intend to sell the drugs in Houston but end up in a small town in Arkansas on the run.  A local Chief of Police (Bill Paxton) is aided by two L.A. cops (Jim Metzler, Earl Billings), and the chief is hell bent on taking the trio down.  Bill Paxton is brilliant as the small town chief who is smarter than he looks. The plot is tense and builds to a violent and well-crafted ending. The film takes plenty of twists and turns with a big one at the end that you won’t see coming.  My Rating:  Full Price    One False Move Info

Weird Credits:  From the credits of The Magnificent Seven:  Mechanical Design: Mechanical Horse

Coming Soon to a Theatre Near You: Loving  (2016) PG-13   Richard and Mildred Loving (Ruth Negga and Joel Edgerton), an interracial couple are sentenced to prison in Virginia in 1958 for the crime of getting married to each other. The film has been the talk of film festivals and was nominated for the Palme d’Or at the Cannes Film Festival.   Loving Info 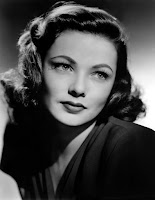