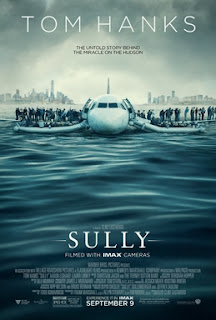 My View:  Sully  (2016)  PG-13  The story of Chesley Sullenberger (Tom Hanks), “Sully,” who became a hero when he landed his engineless plane on the Hudson River, saving 150 lives. This is an uplifting, engaging, solid effort from both director Clint Eastwood and lead actor Tom Hanks. This film has some problems, mostly with a plot that jumps around in the timeline but overall it hits the right notes.  The action sequences of the water landing (not a crash) is exciting and thrilling, even though you know the outcome. IMAX greatly helps make the film feel up close and detailed. What I liked about this movie is that it highlights not only the great pilot skills and leadership that Sully exhibited but also that there were others that contributed to the fact that all 155 passengers and crew survived. It truly was a team effort and gave a well-deserved shot int the arm to the citizens of New York City. Be sure to stay through the credits for a very emotional bonus. My Rating;  Full Price   Sully Website

The 50  (A Movie from My Best/Worst Films of All-Time):   #2 Best Film:  Gone With the Wind  (1939)  The classic love story between the rebellious Southern belle,  Scarlett O’Hara (Vivien Leigh), and a fiery blockade gunrunner Rhett Butler (Clark Gable) during the Civil War.  Vivien Leigh is the reason that this film works as well as it does. She has the acting chops to make us love a character who isn’t very likable. She dominates every scene she is in, even with acting greats such as Gable, Olivia de Havilland and Leslie Howard. It’s a legendary film that lives up to its billing.

In Memory of Ed Wood (A Movie I’ve Only Seen in Trailers but Just Looks Like a Bad Idea):  Bad Santa 2  (2016)  R  It’s hard to put lightning in a bottle twice, and I just don’t think this Billy Bob Thornton starring role will work a 2nd time.  The first film was greatly aided by winning performances from Lauren Graham and Bernie Mac, both of which will be absent from this film.  Bad Santa 2 Website

In Case You Missed It (A Film Just Released on DVD / Blu-ray):  Now You See Me 2 (2016)  I hated this movie about the Four Horsemen getting back together and being pranked by a tech prodigy played by Daniel Radcliffe. I liked the first movie, mostly for the magic scenes which I thought were creative and fun. That’s the problem with this film: it’s a movie about magicians that doesn’t have any magic in it. The closest to believable magic in the film is when the cast throws a playing card around during a heist. The film is boring, predictable and just not much fun.  My Rating: Cable   Now You See Me 2 Website

Forgotten Film:  Reuben, Reuben (1983)  R  Things are not going well for Scottish poet Gowan McGland (Tom Conti). He has lost his job as a professor, hasn’t written a poem in ages, has developed a drinking problem and is on a lecture tour that he despises.  He is feeling pretty sorry for himself when he meets Geneva (Kelly McGillis) and his world changes. Tom Conti gives a dazzling performance as the forlorn poet who has lost his will to write. McGillis is sensational as the woman who sees Gowan for the man who he really is and it changes his life. While not a funny film, it’s a character study performed by a superb cast worth checking out.  My Rating:  Bargain Matinee    Reuben, Reuben Infor

Weird Credits:  From the credits of Sully:  Lead Lighter

Coming Soon to a Theater Near You:  The Dressmaker  (2016)   A glamorous woman (Kate Winslet) returns to her small town in rural Australia.  While she changes the style and dress of the women of the small town, she is there to get revenge on those who did her wrong in the past.  The film has won more than ten awards in Australia and was the toast of the film festival circuit in America.   The Dressmaker Website 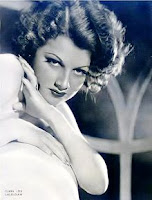