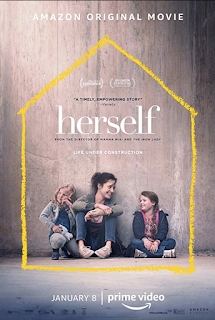 Indiefest: Herself (2020) R   Sandra (Clare Dunne) decides to take her two young girls and leave her abusive husband. Stuck working two jobs just to get by and frustrated by the system that seems to punish more than helping her out, Sandra decides to build a home on her own, for herself and her family. I thoroughly enjoyed this film because of the winning, moving performance by Clare Dunne. Sandra is a character that you can fall in love with; a hardworking, determined woman who is trying as hard as she can, against all the odds, to give her children a better life, no matter what obstacles, the system and her jerk of a husband put in front of her. I loved a scene where Sandra is in court to keep her husband from taking custody of her kids. When Sandra is at her breaking point, she tells the court when is the judge and the system she represents going to ‘Ask better questions.” Herself isn’t a perfect film as the plot gets a little conventional and predictable, but it never loses its heart, and Dunne is always there to give us a moving look into her character’s life and how much she loves her children.    My Rating: Full Price    Herself Website   Now playing in select theatres including Landmark Midtown Art in Atlanta and on the Amazon Prime platform Jan. 8th.

Indiefest: Pieces of a Woman (2020) R   Martha (Vanessa Kirby) and Sean (Shia LaBeouf) seem to have everything going for them; both have great jobs, are in love, and they are about to have their first child. When the child’s birth goes horribly wrong at home, their relationship begins to fall apart under the strain of the loss of a child. First, let me warn you that if you have been a part of the childbirth experience, this is a tough, brutal watch of a movie. The film explores, sometimes too simply, how a marriage can fall apart after the loss of a child. The film centers on Martha, and Vanessa Kirby gives a beautiful, complicated, and painful performance that will have you amazed at just how raw she allows her character to be seen on the screen. It’s a performance that could get Kirby a nomination, and it’s that good. I just wish that the rest of the film's characters were interesting and as complex as Martha. Sean, played by Shia LaBeouf, is fine as Martha’s husband, who is, at first, a loving and supportive partner, but once things go wrong, he becomes predictable as a man whose failings get the best of him. The film is brought down by Martha’s overbearing mother, Elizabeth, played by Ellen Burstyn. Elizabeth is a character you are supposed to hate, someone who continually reminds us that she is a horrible person and not the one that Martha needs to survive this tragedy. That being said, this film is worthy of watching because Vanessa Kirby gives us an incredible, real performance of a woman who is grieving and needs time and love to slowly, but only slightly recover from a horrible loss. My Rating: Full Price    Pieces of a Woman Website    Now playing in select theatres including Landmark Midtown Art in Atlanta and on the Netflix platform Jan. 7th.

Indiefest: Shadow in the Cloud (2020) R   A female WWII pilot, Maude (Chloë Grace Moretz), snags a seat on a B-17 Flying Fortress to deliver top-secret documents. While in flight, the crew and Maude encounter an evil presence on board the flight. This is a film that I would have fallen in love with if I had seen it at a midnight showing at a film festival. This is a fun film that plays off the old Twilight Zone story of a person that sees a ‘gremlin’ while in the air but can’t convince the others on the plane that it’s real until it’s too late. Add in the fact that it’s WWII, and there are enemy planes in the area, and you get some cool action sequences. Sure it’s a little corny, but it’s meant to be that in the best way. Moretz is a blast as the fiery female pilot with a mysterious, top-secret package. I just wish I had seen this film with an audience to hear their reaction to the end of the film. I can only hope that this film becomes a staple on the horror film festival circuit once theatres fully open back up.   My Rating: Bargain Matinee     Shadow in the Cloud Info    Now playing in select theatres.

In Memory of Ed Wood (A Movie I've Only Seen in Trailers But Just Looks Like a Bad Idea): Stars Fell on Alabama (2021) PG-13   A Hollywood agent (James Maslow) is returning to Alabama for his 15th-year high school reunion. When discovering that he is the only one who is not married among his old friends, he convinces a client of his, star Madison Belle (Ciara Hanna), to pose as his girlfriend. Right out of the Hallmark Channel handbook, the film stars two unknowns, and the trailer features a monster truck as their rental car, line dancing, and the two having to wear Alabama sweatshirts to a function.     Stars Fell on Alabama Info

Forgotten Film: Bubble (2005) R   Three people carry on their ordinary lives while working in a doll factory when they become the focal point of a murder in their small midwestern town. Cast with people from a city in Ohio and using their own houses as sets, director Steven Soderbergh (Erin Brockovich, Traffic, Ocean’s Eleven) creates a magical little film about three nobodies. Known for its novel release (it was one of the first films to be released in the theatres and on Video on Demand at the same time), this slice of life film with a twist is much better than some of Soderbergh’s bigger budget films because it feels as real as the people playing the parts.   My Rating: Full Price     Bubble Info

Weird Credits: From the credits of Shadow in the Cloud: Senior Fur Groomer

Email ThisBlogThis!Share to TwitterShare to FacebookShare to Pinterest
Labels: Bubble, Chloë Grace Moretz, Clare Dunne, Herself, Pieces of a Woman, Ray and the Last Dragon, Shadow of a Cloud, Stars Fell on Alabama, Vanessa Kirby