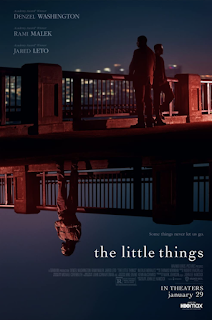 My View: The Little Things (2021) R   Former L.A. Sheriff Joe Deacon (Denzel Washington) comes back to Los Angeles for what should be a quick evidence gathering assignment. Instead, he becomes involved in a hunt for a serial killer led by L.A. Sheriff Jim Baxter (Remi Malek). All roads lead to a man (Jerod Leto) who may be involved with Deacon’s shadowy past. The Little Things should be a better movie with a cast like this. Don’t get me wrong, it’s not bad, but it’s one of those films that feels frustrating watching it because somewhere, under a sluggish plot, is a good movie. Now, anything Denzel is in makes it a better movie, but Remi Malek doesn’t give us much more than a confused, in over his head man, and Jerod Leto doesn’t have a lot to do than be creepy and walk with a limp to strip clubs. The film feels like the detectives in this film; they have a few clues but can’t quite put things together to get the story right.    My Rating: Bargain Matinee     The Little Things Website   The film is currently in select theatres and also on the HBO Max platform.

My View: Palmer (2021) R   Palmer (Justin Timberlake) is back in his small hometown after serving twelve long years in prison. Palmer moves in with his grandmother (June Squibb) and becomes involved in the life of a young boy, Sam (Ryder Allen), who lives next door with his drug-addicted mother (Juno Temple). I like this film, even if it pushes a few plot points out of the way to make the story move to a conclusion we all want. Timberlake does a fine job as a felon just trying to do the right thing, even when the odds are stacked against him. The film is helped by the supporting cast, including the always enjoyable June Squibb, Juno Temple going full out for her drugged-out destructive mother role. Ryder Allen is the adorable Sam, a kid who knows he is different and is ok with it, brightening the screen every time he is on it. The film doesn’t break any new ground, and the results are predictable, but that’s ok in a feel-good film about finding love and support from unexpected places.    My Rating: Bargain Matinee   Palmer Website   The film is available on the Apple TV+ platform.

Indiefest: Supernova (2020) R   Sam (Colin Firth) and Tusker (Stanley Tucci), partners of twenty years, are going on one last road trip to visit friends and family before Tusker’s dementia gets the better of him. Break out the tissues, you are going to need them. Supernova is a moving, touching story of two people in love that have to say good=bye to the life that they have led before it changes forever. Firth and Tucci are magic together, as the relationship is perfectly summed up in the first five minutes of the film as the two playfully argue over whether to use printed maps or the on-board navigation system that Tusker thinks sounds like Margaret Thatcher barking out orders. The movie is full of small, beautiful moments where we get to see the two show their feelings for each other, like having Tusker give Sam lessons on stargazing while looking at a chart in the bed. There are also both big and tiny scenes that show us what a difficult route their life is about to take as Tusker starts to lose his ability to function in the world without help. Supernova is a film that doesn’t disappoint, giving us the emotional scenes full of depth and meaning by two actors at the top of their form.    My Rating: Full Price  Supernova Website  The film is currently playing in select theatres and will be available to rent on participating on-demand services Feb. 16th.

Indiefest: Malcolm & Marie (2021) R   After a night where Malcolm (John David Washington), a director, has had his big movie premiere, he returns home with his girlfriend, Marie (Zendaya), where their relationship is tested and explored. This film has a lot to say; about life, relationships, filmmaking, critics, and co-dependency. Unfortunately, I didn’t like either character, and by the end of the film, I just wanted them to stop talking. The film feels like it’s trying to be a showcase for these two fine actors, but this film gets very tiring quickly, as the two characters go back and forth between a loving, supportive couple to a couple that seems intent on hurting each other as much as possible. I got bored of both characters very quickly and didn’t want to spend this much time (100 min run time) with them because I didn’t care what they had to say. I think both actors are incredibly talented, and it takes guts to take on parts that are so raw and out there, but I just wanted the film to stop long before it did.    My Rating: Bargain Matinee   Malcolm & Marie Website     The film is currently playing in select theatres and will be available on the Netflix platform Feb. 5th.

My View: Penguin Bloom (2021)   Sam (Naomi Watts) is a young mother left unable to walk after a near-fatal accident. She and her family must adapt and learn to deal with her new life and the struggles it brings. In walks a bird named Penguin, who gives Sam hope in an unlikely hero. Penguin Bloom is a movie that has its heart in the right place but never can deliver the emotional moments you want from the film. The film feels a little too much like the script had its moments written down in a list and then checked them off when those moments are shown on the screen. We have seen Watts do better before in this type of role (I kept thinking about the determined mother searching for her family in The Impossible), and her performance, like the script, is very predictable. Sure, it’s an inspiring story about a woman who finds hope and strength through a bond with a bird and don’t get me wrong, it’s a cute bird, but I never felt like I really cared about this family or Sam. I just couldn’t get connected enough with the family to get immersed in the by the numbers storyline.    My Rating: Bargain Matinee    Penguin Bloom Website  The film is available on the Netflix platform.

Indiefest: Dear Comrades (2020)    When the communist government raises food prices again in 1962, the workers in a small industrial town, Novocherkassk, go on strike. The massacre, which then ensues, is seen through the eyes of the rebellious workers. The film centers on Lyuda (Yuliya Vysotskaya), a government official in a working-class town. She lives with her rebellious factory working daughter and her grandfather, who has an opinion on everything. As the strike progresses, Lyuda must deal with her feeling that the Soviet way of life is the most important thing in her life versus her love for her daughter. Lyuda is soon confronted that the government she has given her life to has betrayed her and her family. Yuliya Vysotskaya gives a multi-faceted performance as a woman whose life was used to getting her way because she believed with her whole heart that the Soviet way was the right way, only to have her heartbroken when she finds out the truth.    My Rating: Full Price   Dear Comrades! Website  The film is available to rent on participating on-demand services and will be available on the Hulu platform on Feb. 5th.

Weird Credits:  From the credits of Penguin Bloom: Child Dramaturg

Coming Soon to a Screen Near You: Crisis (2021) R   Three stories about the opioids crisis: an undercover agent posing as a drug trafficker (Armie Hammer) arranges a complicated smuggling operation, an architect (Evangeline Lilly) recovering from an OxyContin addiction tries to find the truth about her son’s disappearance and his involvement with drugs and a university professor (Gary Oldman) finds out that the research he is working on is about to bring a highly addictive drug to the market. The film is from Nicholas Jarecki, who brought us the 2012 film Arbitrage, and the supporting cast includes Greg Kinnear, Michelle Rodriguez, and Lily-Rose Depp.    Crisis Info