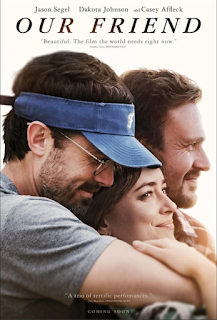 My View: Our Friend (2019) R   Matt (Casey Affleck), his wife Nicole (Dakota Johnson), and Dane (Jason Segel) are best friends. Their lives are upended when Nicole is diagnosed with terminal cancer. Their friendship will be put to the test as the three, along with Matt and Nicole's two young daughters, must deal with the impact. Based on a true story, the film constantly tugs on your heartstrings but never finds its center, mostly due to the storyline, which jumps around in the timeline to the point that it becomes confusing. The illness is at the forefront of the story, right from the start, not giving us time to fully understand the relationship of the three people, who are so connected that Dane is just as important to Nicole as Matt is. I would have liked to have seen some of Matt and Nicole's courtship, but instead, we join the story as they have been already married, and Dane is introduced to Matt by Nicole, as Nicole and Dane work with each other in a theater. Both Affleck and Johnson have nice chemistry together, but I wanted more from Dakota Johnson. I wanted to feel more emotion about her character and feel more deeply about how her loss impacts family, but I don’t know if Johnson isn’t up to the task or Affleck just dominates every scene they are in. I did love Jason Segel’s performance, as the man who holds the family together and is so in love with this family that he is willing to wreck any chance for a family on his own. It’s a brilliant performance that makes this film work as well as it does. I never got the emotional moment from this film that I needed and wanted, possibly because I kept seeing Nicole in her different stages, never quite giving us the ending, but instead jumping back in time to ‘before the diagnosis’.    My Rating: Bargain Matinee   Our Friend Website   Now playing in select theatres and available to rent on participating on-demand services.

My View: No Man's Land (2021) PG-13   There is a 'no man's land' between the Rio Grande and the actual border between Mexico and the US. Jackson (Jake Allyn) is a promising baseball prospect waiting for a tryout while working on his parent's ranch. Out trying to stop rustlers stealing his family's cattle, he accidentally kills a Mexican immigrant boy and goes on the run to Mexico to find the boy's father and find forgiveness. The film has its heart in the right place but tends to make the hero of the story, Jackson, the victim too many times, and its message of, hey, Mexico isn’t so bad as we thought, gets old very fast. I had a hard time believing that a family that grew up on land so close to Mexico had so little knowledge of both the culture and the language. The story throws a lot at us, like Jackson, without knowing the language or even where he is going, is off to find the father of the child he shot, going on an adventure where Jackson is repeatedly shown the goodness and warmth of the Mexican people, all the while being tracked down not only by the father of the boy he killed but a troubled gang leader who, for some reason, goes on a quest to hunt Jackson down. The story goes on forever, with Jackson barely escaping both the law and the men bent on revenge until we get the final confrontation that just doesn’t quite deliver.   My Rating; Bargain Matinee   No Man's Land Website   Now playing in select theatres and available to rent on participating on-demand services.

Indiefest: Identifying Features (2020)   Magdalena (Mercedes Hernandez) embarks on a dangerous journey to find her missing son. Along the way, she encounters Miguel (David Illescas), a young man who was recently was deported from the US. This story of a mother’s love for her son and the need to find out just what happened to someone she loves more than life itself. Mercedes Hernandez gives a powerful, moving performance as she encounters both sides of humanity, the dark side that kills without thought or reason and the goodness, where strangers lend a helping hand and a warm place to lay down for the night. It’s a movie where Magdalena often observes others before she acts or speaks, always moving forward, never giving up until she gets the answers she needs. Identifying Features is a film where the main character doesn’t care about politics, who is in power, or what the dangers are; she just wants the answer to what happened to her son, her beloved son.   My Rating: I Would Pay to See it Again     Identifying Features Website     Now playing in select theatres and available to rent on participating on-demand services.

Indiefest: Acasa, My Home (2020)   Documentary on a family of nine children and their parents who live in the wilderness of the Bucharest Delta, right in the middle of a busy city. After 20 years of living off the land, they are forced to move into a tiny apartment in the city when the government decides to make their home a nature reserve. First, let me tell you the cinematography on this film is some of the best work I have seen, making the beauty of wilderness stand out to the life in the concrete jungle of the city. At first, you are amused by this family and how they survive and flourish in the wilderness, but soon reality creeps in, and you realize that their ideal existence isn’t so ideal. The family is living in a shack with no electricity or running water. The kids are running wild and not getting any schooling, and the parents are more concerned about avoiding the authorities than making sure their kids are prepared for the outside world. The tragedy of the film is that while the family is not ready for city life, neither is the government prepared for the family to flourish in this new environment. We watch as this close family falls apart under the constraints of living in the harsh city world, as they wish they were still back living on their island among the wilderness.   My Rating: Full Price    Acasa, My Home Facebook Page  The film is available to rent on participating on-demand services.

Forgotten Film: A Mighty Wind (2003) PG-13   Co-written and directed by Christopher Guest (Waiting for Guffman, Best in Show), A Mighty Wind is about a reunion concert of 60s folk singers to celebrate the life of a late, beloved folk promoter put on by the promotor’s son (Bob Balaban. He assembles the New Main Street Singers, the legendary group The Folksmen (Christopher Guest, Harry Shearer, Michael McKean), and the headliners, the once power couple, Mitch and Mickey (Eugene Levy, Catherine O’Hara). This is Levy and O’Hara’s movie and fans of their TV show Schitt’s Creek will love their interactions and as always, amazing chemistry. Levy is hilarious as a man who has serious doubts about his talents and is still broken up about his unrequited love of Mickey. Fred Willard is along for the fun as a washed-up TV star who is only known for his catchphrase, along with a supporting cast that includes Parker Posey, Jane Lynch, Jennifer Coolidge, and Ed Begley, Jr. The songs are a little too spot-on to be always enjoyable, but the Levy and O’Hara make this a film worth watching.    My Rating: Full Price   A Mighty Wind Info

Weird Credits: From the credits of Our Friend: Rope Swinger

Coming Soon to a Screen Near You: The Mauritanian (2021) R   Captured and believed to be the chief recruiter for 9/11, Mohamedou Ould Slahi (Tahar Rahim) has been in prison for years without a trial or even charges leveled against him. After losing all hope, attorney Nancy Hollander (Jodie Foster) and her associate Terri Duncan (Shailene Woodley) come to Slahi’s defense. They are opposed by military prosecutor Lt. Colonel Stuart Couch (Benedict Cumberbatch), who eventually uncovers a shocking, far-reaching conspiracy. The cast alone is enough to want to see this film.      The Mauritanian Info