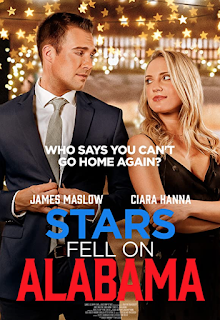 My View: Stars Fell on Alabama (2021) PG-13    A Hollywood agent (James Maslow) is returning to Alabama for his 15th-year high school reunion. When discovering that he is the only one who is not married among his old friends, he convinces a client of his, star Madison Belle (Ciara Hanna), to pose as his girlfriend. The popularity of the Hallmark Channel has grown over the years. Just the amount of romantic Christmas films that were released on not only Hallmark but all the other cable networks this year will attest to that. So it’s not surprising that Hollywood has decided to get on the light romantic film trend. Stars Fell on Alabama would be right at home on Hallmark as it fits its criteria; two good-looking leads whose characters are not attracted to each other at the start of the film but are somehow pushed together, a small town that welcomes one of the characters back after years of being away, both characters have never found their one true love, and of course, a happy ending (sorry for the very obvious spoiler) where the characters come together in the end after breaking up for a short time due to a mistake or misunderstanding. Add in a plot that includes stereotypes, like a monster truck as a rental in the deep south and how everyone, even the Hollywood types, know how to line dance, and you have this film. I will say that the two stars have some great chemistry, and both have a likable, easy presence on the screen. You aren’t going to get much on the drama side, and the writing is pretty weak on plot, but the film delivers what it advertises, a magical romance where everything turns out just fine.    My Rating: Bargain Matinee    Stars Fell on Alabama Website    The film is available to rent on participating on-demand services.

Indiefest: The Reason I Jump (2020)   Documentary explores the world of non-speaking autistic people worldwide, opening a window into an intense and overwhelming, but often joyful, sensory universe. The film is based on the best-selling, ground-breaking book by Naomi Higashida, written when he was just thirteen. This film has instantly moved onto my best movies of 2020 list. The film lets Naomi Higashida, through his book, tell us how autistic people see the world differently from you and me. The film uses the story of five ‘non-verbal’ autistic teenagers to give us their side of what life is like to live in our world from their perspective. My mother was a teacher at the elementary school level of children with special needs, so I have always been interested in this subject. I wasn’t ready for such a profoundly moving film that gave me such insight into a world that is incredibly difficult to understand. I was blown away by not only the teens in this film, one of which is a fantastic artist, but also by the love and attention that each child gets from both their parents and their teachers. There is a moment in this film that just astounded me, that I never realized could happen and made me reevaluate what I thought I knew about people who are autistic. The Reason I Jump is a unique, breathtakingly beautiful adventure in cinema, an experience and exploration of a world that we never knew was there, but now, through this sensational film, we do.   My Rating: I Would Pay to See it Again   The Reason I Jump Website    The film is available to rent on participating on-demand services including the Plaza Atlanta Virtual Screen.

Indiefest: Zombie Bro (2019)   When Francine (Lauren Grego) catches her brother in a full zombie rage, she must convince her parents that her brother, up to now a fairly docile zombie, is out to change his family into his kind. This film takes a funny idea and turns it into a movie that only little kids will enjoy. The film feels as it was made for a kids-only film festival, with a plot that tries to be humorous but never finds its funny bone. The story takes place from Francine's perspective, who is much smarter than her classmates or her parents. Her father, a policeman, is a horrible person who constantly makes fun of Francine while blindly loving his zombie son, always at his daughter's expense. The mother is only slightly more sympathetic to Francine’s viewpoint but still can only see the good in her un-dead son. The film's jokes may delight a five or six-year-old, but adults will find the attempt at comedy amateurish and clumsy. There are a few running gags that are mildly funny, as when Francine and her zombie brother attempt at doing anything normal, like brushing their teeth, but even that becomes quickly tiresome. I don’t have a problem with low budget filmmaking, but I have a problem with bad writing and horrible storylines. Your six-year-old may enjoy some moments in Zombie Bro, but I can almost guarantee that you won’t.   My Rating: Cable   Zombie Bro Website    Now playing in select theatres.

Forgotten Film: Lovely & Amazing  (2001)  R   The story of four women, a mother, Jane (Brenda Blethyn), who in her fifties, has adopted an eight-year-old girl, Annie (Raven Goodwin), and her two adult daughters, Michelle (Catherine Keener) and Elizabeth (Emily Mortimer). Michelle makes tiny art pieces from wood to escape her loveless marriage to Bill (Clark Gregg), and Elizabeth is an actress who cares more about trying to adopt every homeless dog she meets than advancing her acting career. All the women in this film are smart, unhappy, and obsessed with what they think are their flaws. Jane gets liposuction and dreams of being seduced by her doctor. Elizabeth has constant doubts about her ability as an actress, and if she is attractive enough to make it. Even Raven, who is African American, wonders if she eats too much and if she will ever fit in with this family. It is a fascinating look, sometimes humorously, about the troubled lives of four women trying to survive in a society that seems to want perfection in their women.   My Rating: Full Price    Lovely & Amazing Info

Weird Credits: From the credits of Stars Fell on Alabama: Roto Supervisor

Coming Soon to a Screen Near You: Land (2021)   PG-13  Robin Wright (Forrest Gump, House of Cards, Wonder Woman) makes her directorial debut about a woman, Edee (Robin Wright), who, after suffering an unfathomable event, decides to cut herself off from society and live on her own in the wildness of the Rockies. After a local hunger (Demian Bichir) discovers Edee on the brink of death, he decides to teach her how to survive in this harsh but beautiful land. Edee must find a way to live again and put her past behind her. All I needed to know about this film was it stars Robin Wright and Demián Bichir. That’s enough for me to see it, and it should be the same for you.      Land Info