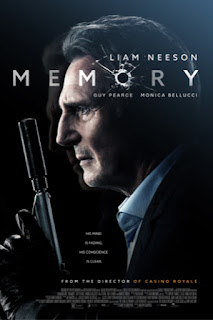 My View: Memory (2022) R   An assassin-for-hire, Alex (Liam Neeson), becomes a target himself after he refuses to complete a job for a notorious criminal organization. Now Alex must hunt down the people who hired him. However, Alex is hampered by a memory that is beginning to falter, blurring the lines between right and wrong. We have all seen this plot before; an aging hitman wants to quit but decides to take one last job, then decides not to go through with it because it involves killing a kid. The twist in this film is that the hitman is suffering from the onset of Alzheimer’s. Neeson has, of late, been doing the hitman done wrong in quite a few films lately, and it's getting really old. Sure it has a nice twist where our hero is having such trouble with his memory that he writes stuff on his arm with a sharpie to help him on his hits, but this film drags on and on. There is so much exposition with characters explaining every detail of what they find out (or don’t) that it probably makes this film last 15 minutes longer than it should. What could have been an interesting look at an aging hitman becomes a dull story of revenge that just seems to go on and on.   My Rating: Cable   Memory Website  Now playing in theaters nationwide.

My View: Crush (2022)    Page (Rowan Blanchard) is a talented art student in her senior year of high school. In order to be close to her ‘crush,’ Gabby. Page joins the track team. Although Page stinks at track, she is about to discover that love can be complicated when she finds that she is falling for someone else, Gabby’s sister AJ (Auli’i Cravalho). It’s fun to see a film where ‘coming out is not the main subject and is even used a couple of times as a source of jokes. Instead, being gay is just a part of the high school way of life. This is a pleasant and funny look at high school crushes and romance with a cast that has fun with it. Rowan Blanchard is delightful as Page, a slightly goofy, clumsy girl who has a crush on a fellow high school student. Page joins the track team to be close to Page, but instead of being paired with Gabby, she seems always to be paired with Gabby’s twin, AJ. I had fun watching this film, and while it’s not anything to get excited about, it’s still a blast to watch Page try her best to get close to Gabby, all the while, we know that she will end up with AJ in the end.   My Rating: Bargain Matinee   Crush Website  Now playing on the Hulu platform. 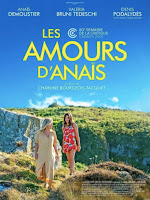 Indiefest: Anaïs in Love (2021) R  Anaïs (Anaïs Demoustier) is a 30-year-old woman floundering in life. She meets Daniel (Denis Podalydes), an older man who almost instantly falls for her. However, Daniel lives with his long-term girlfriend, a writer named Emilie (Valeria Bruni Tedeschi). Anaïs becomes obsessed with Emilie and makes it her mission to have Emilie fall in love with her. Anaïs is a young woman you will fall in love with despite being impulsive, self-centered, and flighty. She is the type of young woman who thinks nothing of letting a boyfriend know that she is pregnant and will have an abortion while breaking up with him. She gets by because she is beautiful and is full of life, the kind of young woman who can talk her way out of owning back rent or taking off at the last minute to go to a conference that she hasn’t been invited to. Anaïs is floating by in life until she meets Emilie, an older woman who is a distinguished writer. It doesn’t matter that Emilie is involved with Daniel, a man that Anaïs has had an affair with. She has set her sights on Emilie, and nothing will get in the way of getting close to her. Anaïs Demoustier is perfect in the role, an actress that fills the screen with life and self-confidence, something that Anaïs, the character, is abounding with. Anaïs in Love is a fun and lovely film that makes you want to fall in love and have that excitement and thrill of seeing a person who makes your world go around.   My Rating: Full Price   Anais In Love Website  Now playing in select theatres.

Indiefest: Charlotte (2021)   Charlotte is a young German-Jewish painter who comes of age in Berling on the eve of the Second World War. Charlotte has dreams of becoming a famous artist but realizes that her world is changing quickly and dangerously, and she leaves Berlin for the safety of the South of France. She finds new love and begins painting again, but a family secret threatens her work and life. This is an animated story of Charlotte Salomon, an artist who died in a concentration camp but not before creating 1000 paintings that told her life story. Charlotte is a gorgeous film that lovely tells her story and gives us an insight into many of her paintings. It’s a sad story but one that is also full of love and beauty.   My Rating: Full Price   Charlotte Website  Now playing in select theatres.

My View: The Mystery of Marilyn Monroe: The Unheard Tapes (2022)    The life and death of Marilyn Monroe has fascinated the world. Now a documentary explores the end of the icon with unheard interviews with both Marilyn and her inner circle. Will these previously secret tapes uncover the mystery of Marilyn? The life and death of Marilyn is probably one of the world’s most documented lives. Marilyn continues, even after so long to fascinate us, and her death has always been shrouded in mystery and conspiracy theories. Does this film give us much more insight into her life and her untimely death at age 36? Not really. I didn’t learn much more about Marilyn than I already knew. There certainly isn’t anything shocking or revealing about what was most likely an accidental overdose or a suicide. We do get to hear interviews with some somewhat shady individuals, but mostly they only confirm that Marilyn had affairs with both the Kennedy brothers while John was the President and maybe long before. Overall, if you don’t know much about Marilyn’s life, it’s a good primer, but will you learn anything new? The answer is no as I think the mystery has long been solved.    My Rating: Bargain Matinee   The Mystery of Marilyn Monroe Website  Now playing on the Netflix platform.

Forgotten Film: The Art of Getting By (2011) PG-13   George (Freddie Highmore) is a high school kid who just doesn’t try to do anything in life. He is proud of the fact that he has never done anything in high school because George doesn’t see why he should. Then he meets two people, Sally (Emma Roberts), a fellow student who suddenly takes a liking to him, and his art teacher (Jarlath Conroy), who thinks that George has talent and could be an artist if he just found some inspiration. George has a lot of people in his life that want him to apply himself, but until Sally, there was never a reason to do so. I love this movie because of the chemistry between Highmore and Roberts, who work incredibly well on screen. The plot is a little predictable, and I am not totally happy with the 2nd half of the film, but Roberts and Highmore make it a movie worth watching.   My Rating: Full Price   The Art of Getting By Info

Weird Credits: From the credits of Crush: Mural Scenic

Coming Soon to a Screen Near Your:  Senior Year (2022) A cheerleading accident left her in a coma for 20 years. Now she is awake and ready to return for her senior year of high school…as a 37-year-old. Senior Year stars Rebel Wilson, and that’s enough for me to see it.    Senior Year Website 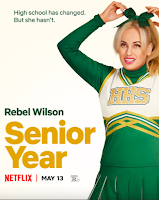