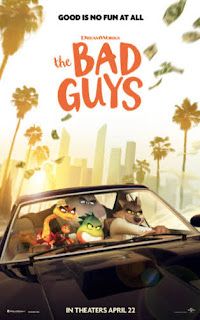 Familyfaire: The Bad Guys (2022) PG   The Bad Guys is about a gang of master thieves led by the Big Bad Wolf (voiced by Sam Rockwell). When the gang is caught trying to steal a priceless award, Professor Marmalade (voiced by Richard Ayoade) vows to turn the gang into ‘The Good Guys.’ Undoubtedly, Wolf and his gang will turn the attempt into another way to steal the award back. I liked the Ocean’s Eleven aspects of the plot with slow motion and split screens, and I loved Craig Robinson’s Shark character, who though a giant shark, is a master of disguise. Kids will love the not stop action and the silly characters, though I quickly got tired of the farting piranha. There is enough substance to the plot, including a very cool twist at the end, to keep parents from getting bored. Overall, not a bad way to spend some time with a motley group of thieves led by a big, bad wolf who has a weakness for a little kitty.   My Rating: Bargain Matinee  The Bad Guys Website  Now playing in theaters nationwide.

My Take: The Unbearable Weight of Massive Talent   (2022) R  A cash-strapped Nicolas Cage (yes, that Nic Cage) has decided to retire from acting and agrees to make an appearance for 1 million dollars at a billionaire’s (Pedro Pascal) birthday party. It gets complicated when Nic learns that the billionaire is not only a fan but is a drug kingpin, and the CIA wants Nic to spy on him and save a kidnapped teenager. I am a big fan of Nicolas Cage (having discovered him in a Forgotten FIlm of mine, Valley Girl), and I love it when actors aren’t too full of themselves to be able to make fun of their personas. Well, Mr. Cage, I salute you. Unbearable Weight is a fun film full of letting Nic Cage be Nic Cage. If you are a fan of any of his movies, this is one for you. There are constant references to Cage’s films, both good and bad. Pedro Pascal is hilarious as the billionaire with a Nic Cage crush. The scenes where Cage and Pascal go to town while on LSD had me constantly cracking up. The plot is a little silly, and I had a tough time with Tiffany Haddish’s over-the-top portrayal of a CIA agent who forces Cage to become a spy looking for a kidnapped girl. However, this is too much fun of a film to be ruined by one bad performance. So go and take a ride on the Nicolas Cage experience. You won’t be disappointed.   My Rating: Full Price   The Unbearable Weight of Massive Talent Website  Now playing in theaters nationwide.

My Take: Polar Bear (2022) PG  Polar Bear is about a new mother as she raises her cubs in a world that has become increasingly hard due to the polar bears shrinking habitat. I am going to warn you right off the bat that you will need some tissues while watching this film. Nature can be cruel, and this film is about how polar bears are quickly losing their habitat, and very soon, if things don’t change, they won’t be able to survive. Yes, there are some beautiful shots of the two cubs playing with each other in the snow and scenes where we see just how much the mother loves her cubs. And there is a wonderful scene where two adult bears play and dance about on the snow and ice. But, and this is big, there is also hardship and death, where the film doesn’t pull any punches in its hard-hitting reality. The film is beautifully narrated by Catherine Keener, who lets us experience the movie through the eyes of one of the young cubs as they grow up under the protection and guidance of their fierce but loving mother. Polar Bear is a film that will touch your heart and maybe, just maybe, inspire you to help protect these magnificent creatures. My Rating: Full Price   Polar Bear Website  Now playing on the Disney+ platform.

My Take: The Northman  (2022) R   The Northman is a tale about a Viking prince, Amleth (Alexander Skarsgård), who, after years away, has come back to avenge his father’s (Ethan Hawke) death and rescue his mother (Nichole Kidman). Filmmaker Robert Eggers is known for making films that are a little strange, a little weird. I was expecting a whole lot of strange, but instead, I got a fantastic Norse tale that has some magic and a few horse-riding gods, but overall it’s a bloody story of revenge and fate, with a little bit of Shakespeare thrown in. Alexander Skarsgård fills the screen with his hulking body as he fights his way, one bloody step at a time, to get revenge on his father’s brother, who killed his father, stole his crown, and took Amleth's mother as his bride. Amleth witnesses all this as a boy, and as he escapes, he vows revenge. We skip to years later, and Amleth is on the search for his mother and his uncle. Along the way, he meets a slave, Olga (Anya Taylor-Joy), who is eager to help Amleth in his quest, and little by little, Amleth starts killing his uncle's tribe, all the while hiding out as a slave. The Northman is a magical tale full of blood and chopped-off heads, along with a healthy dose of Viking lore and a landscape that is beautiful but harsh. The fight sequences are savage, and the revenge is ruthless, but so are the people that inhabit this world. This is a tale of one man’s obsession and how far he will go for that revenge he can almost smell and taste.    My Rating: Full Price  The Northman Website  Now playing in theatres nationwide.

Forgotten Film: Birth (2004) R   It’s been ten years since losing her husband, Sean, to a heart attack while jogging, and now Anna (Nicole Kidman) is about to get re-married. At the party to celebrate a family birthday, a mysterious young boy shows up uninvited and tells everyone that he is Sean, Anna’s late husband. And so starts the strange and captivating film Birth. As you can imagine, Anna is so slow to believe that her husband has been reincarnated into this little boy, but as she gets to know the new ‘Sean,’ she learns that he knows facts about her and her family that only the original Sean could know. The question is, will you, the viewer believe that Sean the boy is Sean the husband. Kidman gives a spectacular performance of a woman who loved her first husband and wants that feeling to return. Cameron Bright is convincing as Sean, who takes his place in the world very seriously and wants Anna back in his life. Birth is a film that takes a turn near the end that may or maybe not answer all your questions.   My Rating: Bargain Matinee    Birth Info

Weird Credits: From the credits of The Bad Guys: Wolf’s Car Design

Coming Soon to a Screen Near You: Thor: Love and Thunder (2022) Thor (Chris Hemsworth) is trying to deal with the aftermath of the Avengers' battle with Thanos. Should he retire and give up being a superhero? But there is a new foe to fight, Gorr the God Butcher (Christian Bale), and Thor asks his friends to help take down Gorr, who intends to make the gods extinct. Directed by Taika Waititi, appearances by the Guardians of the Galaxy, and Christian Bale? I think that’s enough to see this next Marvel film, don’t you?   Thor: Love and Thunder Website