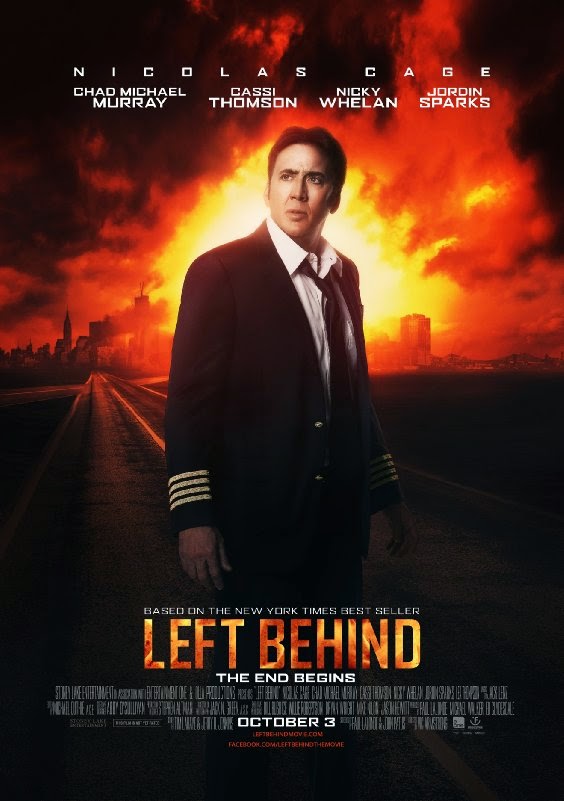 1). Left Behind (2014)   How bad is this film? It makes the Kirk Cameron's film (of the same name) from 2000 seem like a masterpiece. This film should have been at least fun to watch because Nicolas Cage can chew scenery with the best of them. Sadly, he looks as if he was severely depressed and possibly on medication while making the film, and he seemed to make no effort to show any emotion. The film is summed up by a Photo-Shopped picture of a family that is so bad it looks as if it was done by a four-year-old with a dial-up modem and a fax machine.

2). Tusk (2014) It was painful and gross to watch this film, as a podcaster (Justin Long) is (spoiler alert) turned slowly into a walrus by a mysterious seafarer (Michael Parks). It's sad how far down writer / director Kevin Smith has come from his glory days of Clerks (1994) and Chasing Amy (1997).

3). Dumb and Dumber To (2014) What made this such a disappointment to watch is how this film totally lost the fun and sweetness of the first film. This film isn't funny and is mean spirited.  Lloyd and Harry, who used to be lovable, now just play horrible practical jokes on each other.

4). Ouija (2014) I think a movie based on "Chutes and Ladders" would have been scarier than this film. The plot never makes sense and is completely confusing. It's if the filmmakers wrote this script on the board itself.

5). Teenage Mutant Ninja Turtles (2014) When Megan Fox is on the screen more than the Turtles, you know you have problems. The filmmakers were convinced that they had to explain everything along the way, going overboard when the opening credits told the story that they then took the next fifteen minutes to explore again.

6).  And So it Goes (2014) It's hard to make a romantic comedy where the male lead (Michael Douglas) plays a character we actually hate. Yes, I know he is supposed to be changed by the love a good woman (Diane Keaton), but by the time it happens, we just don't care anymore. In fact, I want to yell at Keaton's character to run away as fast as she can. Unfortunately, I didn't heed my own advice.

7). Tammy (2014) At one point I started to feel sorry for Melissa McCarthy, handicapped by a bad script and poor jokes, until I remembered that she and her husband were responsible for this dreck of a film. It's a sad thing when the outtakes shown during the credits are the only funny parts.

8). Transformers: Age of Extinction (2014) It you love movies with loads of bad dialog and action sequences that make no sense, then this is the movie for you. The script feels as if Michael Bay just followed his son around while he played with some toys and took notes. The film is one long product placement movie that would be a great drinking game...the only way you will enjoy it.

9). Legends of Oz: Dorothy’s Return (2014) This sort of sequel to the Wizard of Oz will bore the kids by the first song (Good news - you will never buy the soundtrack.), and parents will want to leave by the end of the opening credits. Poor storytelling and even worse songwriting make this film so painful to watch.

10A). Transcendence (2014) I never cared if the researcher (played by Johnny Depp) ever got out of the computer he inhabits after he dies (don't ask how that happens). This is one of those films that I wanted to be over five minutes after it started.

10B). The Bag Man (2014) You would think a film noir movie that takes place in the Louisiana swamp and stars John Cusack and Robert De Niro would at least be watchable, but you would be wrong. Horrible dialog and plot that just never gets moving makes this film one of the worst of the year.

10C). Blended (2014) It wouldn't be a worst films of the year list without Mr. Adam Sandler. Sandler likes to make films where he can take his family on vacation. A couple of years ago, it was Hawaii with the horrible Just Go With It (2011). This year, it’s a film about two single-parent families who mistakenly go on an African vacation. The film felt like it was three hours long, had almost no funny material and couldn’t decide if it was a kid’s movie or a film for frat boys. So it did both, poorly.

Dishonorable Mention: Dracula Untold, Alexander and the Terrible, Horrible, No Good, Very Bad Day, The Judge, Annabelle, The Hero of Color City, The Man on Her Mind, The Identical, Jersey Boys, Need for Speed, 3 Days to Kill, The Nut Job, The Legend of Hercules, Paranormal Activity: The Marked Ones
Posted by Mike at 12:30 AM

Email ThisBlogThis!Share to TwitterShare to FacebookShare to Pinterest
Labels: And So It Goes, Blended, Dumb and Dumber To, Left Behind, Legends of Oz: Dorothy's Revenge, Ouija, Tammy, Teenage Mutant Ninja Turtles, The Bag Man, Transcendence, Transformers: Age of Extinction, Tusk